Nature is truly remarkable. Plants employ strategies to reduce competition and keep other plants from growing too close. Crop scientist Dr Suzette Bezuidenhout says this has an application in weed control. Lloyd Phillips reports in part 1 of two parts. 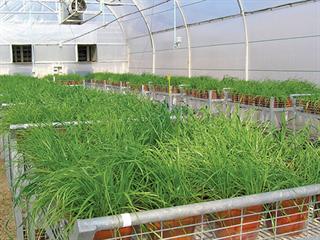 A weed is a plant that competes with cultivated plants, and weeds are the bane of any crop farmer’s existence. They compete with crops for light, water, nutrients and space. Farmers spend large sums on chemicals to contain and manage weeds. But chemicals are far from ideal; they frequently find their way into the wider environment, can be hazardous to human and animal health, are costly, and can lead to a build-up of resistance in plants.

Plant wars
Certain plant species contain allelochemicals that they release into the surrounding soil to inhibit the germination and growth of other plants. This gives these plants a competitive advantage, both in the wild and on the land. The so-called allelopathic effect can be used to a plant’s advantage or to its detriment.

The study of allelopathy is a passion for Dr Suzette Bezuidenhout, a crop protection scientist with the KwaZulu-Natal Department of Agriculture and Environmental Affairs (KZN DAEA). Speaking at the 2013 No-Till Conservation Agriculture Conference held recently in the province, she told conference delegates, most of whom were crop farmers, that allelopathic ability varied between plant species.

Plant species with a stronger allelopathic ability would be more likely to outcompete those with weaker allelopathic abilities, particularly during times when light, water, nutrients or space, were in short supply, such as during a drought. “There could be many reasons for poor crop yields,” explains Bezuidenhout. “The allelopathic effects of certain weeds may be a contributing factor to poor yields, but are unlikely to be the sole cause. Various aspects of crop production, such as seed cultivar choice, fertilising programme, and irrigation, must be well-managed to achieve optimal yields. Effective weed management is just one aspect that requires good management.”

Organic and synthetic
According to Bezuidenhout, there are a number of surprising similarities between allelochemicals and commercially available chemical herbicides. Each adds chemicals to the environment and inhibits the growth of competing plants (See Table 1). At the same time, there are a number of differences between allelochemicals and chemical herbicides:

“In farming, optimal weed control can only be achieved through integrating mechanical, chemical and cultural methods,” explains Bezuidenhout. “Weed control through herbicide use alone is a short-term measure. Mechanical and cultural weed control methods provide longer-term protection when used in conjunction with chemical control. “A farmer who wants to incorporate allelopathy as a cultural strategy to control weeds should ask two questions: ‘How will I do it?’ and ‘When am I going to do it?’

Cover crops
According to Bezuidenhout, a weed control method used by some farmers is allelopathic cover crops planted and grown in rotation with primary crops, or even planted at the same time as the primary crop. When cover crops reach a certain age or size, the farmer discs them in or sprays them off with a glyphosate-based chemical.

“The mulch layer created by cover crops creates a barrier for some species of weed seedlings, particularly grasses, to grow through to reach sunlight, an essential plant requirement,” explains Bezuidenhout. “Often, these grass seedlings will have used up the nutrient reserves in their tiny individual seeds before they can reach sunlight, and will die off.

The cover crop mulch layer will significantly reduce the amount of light reaching a blackjack (Bidens pilosa) seedling, and the seedling is likely to die as result of this. Certain weed seeds need a particular soil temperature and a certain amount of soil moisture to germinate. The cover crop mulch layer can disrupt this to the extent that these weed seeds don’t germinate at all.”