New Holland has reclaimed the Guinness world record for the most wheat harvested in eight hours.

On 15 August, New Holland once more made the Guinness World Records, harvesting 797,66t of wheat in eight hours with its CR10.90 combine. The previous record of 675,84t was broken after just six hours and 36 minutes.

The driver was Serge Deleersnyder from New Holland’s ‘Centre of Harvesting Excellence’ in Zedelgem, Belgium, and the record was set at HR Bourn and Sons Farm in Grange de Lings near Wragby, Lincolnshire, UK.

The land had been sown with Santiago wheat in the northern hemisphere autumn of 2013 and chosen for the record-breaking attempt in May 2014. The harvesting started at 11.17am and the day saw changing weather conditions, with the ambient temperature ranging from 18°C to 21°C and light showers occurring from 5:30pm onwards.

The average throughput was 99,7t/h, peaking at 135t/h in a crop yielding an average of 9,95t/ha with an average moisture content of 16,2%. The grain was hauled to the farm storage facility by a team of drivers with five New Holland T7 tractors and trailers.

The record was achieved using a mere 1,12l of fuel per ton of grain harvested, with the straw chopper engaged throughout. Powered by the award-winning Cursor 16 engine, which develops approximately 490kW, the CR10.90 is
compliant with Tier 4B emissions regulations.

The extra-long 10m unloading auger and super-fast 142l/s unloading speed made quick work of the constantly filling grain tank. The CR10.90 was equipped with IntelliSteer auto guidance, which ensured accuracy of between 1cm and 2cm, optimising the effectiveness of the 13,7m 840CD draper-header during every pass.

Relative yield
The 9,95t/ha yield of the crop is of particular interest. According to UK-based Rothamsted Research, the oldest agricultural research station in the world, wheat provides a fifth of human calories, but since 1980 the rate of increase in wheat yield has declined. The average farm yield of wheat in the UK is currently 8,4t/ha. Rothamsted is seeking to increase UK wheat yield potential to 20t/ha within the next 20 years.

By contrast, according to the Directorate Plant Production, Pretoria, wheat yield in South Africa averages 2t to 2,5t/ ha in dryland conditions and about 5t/ ha under irrigation. 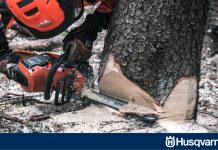 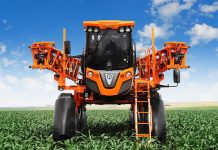