The entry-level, two-light, 3W Sola-Lite System consists of one 3W solar panel with mounting brackets, a controller unit with a 12V battery, a mounting bracket, two LED lights with three-function pull switches, a cellphone-charging socket with dust cap and an in-car charger, which can be plugged into the socket. Full installation instructions and all wiring, screws and other bits and pieces are included.

Each light contains 12 LEDs and a three-function silent pull switch. The first pull switches on all 12 LEDs, the second six LEDs in a staggered array and the third switches the device off altogether. Prices vary from R718 to R1 457, excluding VAT and delivery. 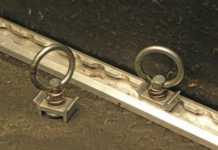 The answer when a pet goes missing

Tailgate troubles – easy does it!