In 2009 Lionel Whittal became the first registered Mbuzi goat breeder in South Africa. Mike Burgess recently visited him on his 400ha farm Sandilli, in the Bolo area of the Eastern Cape to see what impact these small, well-proportioned, disease-resistant indigenous goats are having on his farming enterprise. 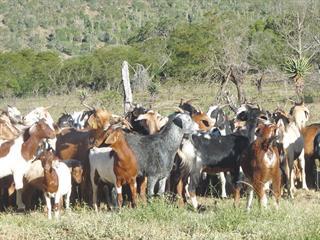 “Nature has bred them to be hard and I plan to keep it that way,” says Lionel Whittal, farmer and Chairman of the Eastern Cape Indigenous Veld Goat Club, about his flock of 55 Mbuzi ewes and three rams.

The Mbuzi is a geographic ecotype of the Indigenous Veld Goat, which became a registered breed in 2009. Descendants of goats that arrived with African pastoralist communities centuries ago, they are well adapted to local conditions.

Forged in a harsh environment
Lionel left school to farm in Bolo in 1997. Wanting to better utilise the thick bush of his 800ha family farms to increase his income, he introduced around 15 Boer Goat x Mbuzi crosses to graze with his Nguni cattle. He didn’t know that, as they disappeared into the dense bush, most would succumb to heartwater. This first goat farming venture proved disastrous and costly.

But Victor Biggs, former Nguni cattle and Mbuzi goat breeder from the nearby Kei Road district, assured Lionel that Mbuzi goats were adaptable and fertile, and Lionel decided to take a chance. Months after he acquired his easy-to-manage, Mbuzis, none had died from heartwater.

Lionel then increased and improved his flock by acquiring Mbuzis from the other commercial breeders and the former Transkei, one of their traditional strongholds.

Breed advantages
The Transkei goats are small and well-framed, ranging in colour from black and brown to steely grey. “Some of the best genetics come from along the Wild Coast of the Transkei,” says Lionel, “they don’t just sell their goats there – they’re proud of their stock.”

Today’s Mbuzis carry the bloodline of a highly independent yet productive animal that’s medium- to small-framed and well-proportioned. Their characteristic longer legs are built for extensive foraging.

Genetically shaped by time, Mbuzis are geared to survive in harsh African conditions, says Lionel. “They are the hardiest goat breed in South Africa – their resistance to heartwater is phenomenal. They’ve been exposed to all the disease and parasites of high-rainfall and tropical areas for centuries without veterinary assistance.”

Therefore, he says, his goats need no inoculations against diseases like heartwater, pulpy kidney and pasturella, and are dipped only once every two months to combat bont tick and screw worm. Lionel says many South African stud breeders try to increase animal size, rather than to consider kilograms per hectare produced. But his goal is to keep his Mbuzis small, tough and productive.

“The Mbuzi is the smallest of the meat goats and that’s a big plus for me,” says Lionel. “I can run three Mbuzis to every two standard meat goats on any given piece of land, which gives me more marketable kids per hectare.”

Mbuzi fertility is crucial. Ewes can lamb up to three times in two years at an average lambing rate of 150%. Young rams and ewes are ready for mating in multiple sire flocks at six months. Lionel wants to preserve this fertility.

Registration of the Mbuzi
Lionel has represented the Eastern Cape in the National Indigenous Veld Goat (IVG) Club since its inaugural meeting in 2007. Today the IVG breed society consists of over 100 breeders geared toward the preservation of the Indigenous Veld Goat’s four ecotypes – the Mbuzi, Eastern Cape Xhosa Lob Ear, Northern Cape Speckled and Kunene Type goats.

Sales over the years ensured genetics were distributed amongst enthusiasts, based on the selection for a natural, unimproved and unchanged type within each of these four eco-types. The aim of registration, Lionel explains, is not to “improve” the breed, but to maintain its wonderful adaptive attributes, including disease resistance and fertility.

Now that the Indigenous Veld Goat is recognised by SA Stud Book, strains like the Mbuzi can claim the credibility they deserve as survivors and efficient producers of healthy meat, says Lionel. “As a registered breeder I have Stud Book to back me up with the relevant data. This gives me credibility.”

Within the structures of registration, the breed will also receive more scientific attention, improving the flock. “Having outsiders evaluate your goats gives you a better idea of where you are in your breeding programme – they see things that you don’t,” says Lionel. “Little things you overlook could have a big impact later on.”

His favourite ewe, a 2006 kid from Transkei genetics, recently attracted an offer of R20 000 – but Lionel refuses to sell her, explaining that he has sold over 60 ewes to fellow IVG breeders in the last few years to expand the breed’s popularity. By sharing his genetics, he reduced his own flock from almost 150 to 76 ewes.

The Mbuzi’s vibrant traditional market
“Minimal input equals maximum profit,” says Lionel, “This is the most important characteristic of the Mbuzi.” Also central to their success on Sandilli is the vibrant traditional demand for these goats in the Eastern Cape.

Lionel mostly caters for the abakhweta – Xhosa initiates entering manhood via ritual circumcision – a cultural process that demands two small, affordable goats with enough meat to round off the social gathering honourably. The Mbuzi, says Lionel, has been meeting traditional demand for hundreds of years.

“Mbuzi kapaters (castrated goats) wean at 20kg to 30kg at six months,” he explains. “That’s the ideal weight for the traditional market. They fetch a premium price – currently R25/kg liveweight.”