PW van Heerden’s Red Ribbon Meatmaster stud near Wesselsbron, which started out as a
cross-breeding experiment, is now a top stud that endeavours to produce well-adapted and balanced sheep genetics for commercial producers. 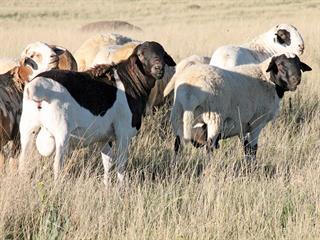 The Meatmaster is a no-nonsense sheep bred for optimum meat production, says Wesselsbron-based farmer, PW van Heerden. PW and his brothers Izak and Willem farm on Geduld with their father Pieter, a SA Mutton Merino stud breeder. Izak is responsible for the grain (maize and sunflower) production, while Willem runs the vegetable enterprise (watermelon, pumpkin and cabbage, among others). He also manages the game farming operation (springbok, wildebeest and blesbok). PW is in charge of the livestock and lion breeding.

The brothers are the fourth-generation Van Heerdens to farm in the Wesselsbron district.

“I initially acquired Meatmaster ewes for cross-breeding with Mutton Merinos to get heavier slaughter lambs,” PW explains. “The Meatmaster’s maternal ability complemented the Mutton Merino’s muscling and I was so impressed with its other qualities that I decided to establish a stud of this exceptional breed in 2012.”

PW spent much time searching for top-quality genetics suitable for the Geduld farming operation. By travelling around the country to visit leading breeders, he learnt a good deal about the breed and how to manage these sheep. “To farm Meatmasters is an emotional experience,” he admits. “One really becomes attached to these exceptional animals with their remarkable temperament and strong personalities.”

What impressed PW the most was that this composite breed had been developed along economic principles.
Time was not wasted on petty conformation issues, as the development process and breeding values focused on keeping input as low as possible, while ensuring maximum meat production, he explains.

The Red Ribbon stud, which consists of 200 ewes, is based on the three pillars of hardiness, fertility and muscling. It is not a Meatmaster breeder’s objective to win carcass competitions, but rather to produce as much meat per hectare as possible. An added bonus, says PW, is that weaned lambs are market-ready at between 20 and 30 weeks.

Accurate statistics
Performance testing is key to the stud’s success. PW says animal recording enables him to keep track of every animal’s performance and contribution to the overall profitability of the stud. The selection process starts at birth, with new-born lambs with defects being culled. All lambs are weighed and weaned at 100 days. Poor growers and their dams are culled without exception.

To accommodate the variation in type in terms of conformation and body size, PW selects for lambs that will reach a slaughter weight of 15kg to 25kg off their mothers, preferably before five months. He retains about 70% of the lambs selected at weaning and markets the rest as breeding stock. A further 25% to 30% of the selected animals are marketed as breeding stock at 12 months.

Marketing
PW sells sheep directly from the farm, as well as at the annual national sale in Bloemfontein and the Jacaranda Sale in Pretoria. There is growing demand for Meatmasters in the rest of Africa and he has exported a number of sheep to Zambia. Enquiries have recently also been received from Kenya.

“The Meatmaster is a true African sheep bred for African conditions,” he says. “It’s steadily gaining ground because of its non-selective foraging, disease- and tick-resistance, and ability to tolerate a harsh climate. And its strong ‘flocking’ behaviour makes it more resistant to predation and easier to manage.”

He adds that Meatmaster Breeders’ Society representatives regularly visit prospective buyers on their farms to inspect farming operations and provide breeding advice and this helps to safeguard breeding standards. The breed is also gaining ground in the northern areas of South Africa, says PW, who is serving as the president of the Meatmaster Breeders’ Society. According to him, the breed’s innate ability to develop resistance to diseases such as heartwater makes it increasingly sought-after in provinces where the disease is endemic.

The flock maintains a lambing rate of between 127% and 133% of pregnant ewes and a weaning rate of between 90% and 100% of lambs born. The ewes lamb for the first time between 12 and 15 months, with an average interlambing period of 319 days. The ewes weigh between 50kg and 80kg. This wide variation in weight is due to the difference in type in terms of conformation and body size and is also influenced by seasonal veld conditions.

The ideal ewe
The optimal Red Ribbon Meatmaster ewe is feminine, sleek and preferably polled, with short, shiny hair and an undercoat of fluffy fine wool to protect against extreme temperature and ticks. The ewes are medium-sized with functional, efficient body conformation, well-placed legs, strong walking ability, a well-formed udder and strong maternal instinct. Lambing problems are virtually unheard of in the Meatmaster breed.

Breeding aptitude
The number of ewes per ram varies from 40 to 60, depending on the ram’s scrotal circumference. Meatmaster rams are early-maturing with a high libido. It is not uncommon for four or five ewes in a flock to lamb on the same day, proving the ram’s breeding prowess.Selective breeding takes careful planning and PW selects rams based on SA Stud Book data.

To introduce new genetics, about 60 ewes are artificially inseminated each breeding season using laparoscopy. Semen is sourced from well-known studs such as Mohimba Meatmasters in Bloemfontein and Superior Genetics in Bethulie. The AI ewes are separated from the rest of the herd and placed in a camp with high nutritional value grazing to support ovulation.

“We don’t match rams with ewes in a random manner,” explains PW. “To ensure long-term sustainability, I select both. My ultimate aim is to produce well-adapted and balanced animals to meet the commercial sheep producer’s requirements.”

Ideal rams are big and muscular and strong in the loin area, with good balance between length, width and depth. Their scrotums are well-formed without abnormalities. Tails are well attached, and preferably no longer than the hocks, with a neat wedge shape and moderate fat.

Grazing
Veld on Geduld is limited and pastures such as sugargraze sorghum (70 ha) and grain stover form the mainstay of the forage resource. The veld is grazed from October to December when the stover is depleted and before the sugargraze is ready. The stover, divided into three 100ha camps, is grazed in winter and the sugargraze during late summer, until stover becomes available again.

PW keeps the flock in small camps of about 5 ha on the sugargraze on a rotation of two to three weeks, depending on the condition of the pasture. Borehole water and rock salt is supplied in each camp. He is also establishing Russian grass or lewensgras (Phalaris spp) pasture.

The sweetveld on Geduld includes Eragrostis curvula (weeping lovegrass) and Themeda triandra (red grass). Average rainfall is between 350mm and 450mm with temperatures in the high 30°C in summer and below freezing in winter.
PW employs stock guards to protect the flock against jackal and caracal predation as well as stock theft.

“I’ve been using the guards for three years and they’ve become indispensable,” he says.

To be effective in the commercial market, a breeder must manage his stud like a commercial flock, says PW.  “Breeders shouldn’t mollycoddle stud animals. It’s not a stud animal just because it has ‘papers’. The proof lies in its performance, and this is the objective of SA Meatmaster breeders.

“It’s the ideal breed for beginner farmers because of the low input costs and exceptional production. The Meatmaster really is a money-maker, but new breeders must make sure they buy from proven breeders,” he says.