Last week, I mentioned how humus formation depended on nitrogen (N). Even when a large quantity of organic matter is present, very little humus can be created if the nitrogen level is too low. 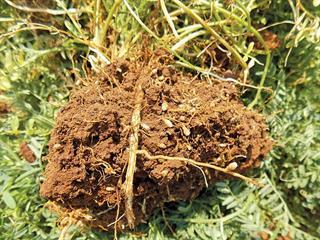 The late John Fair illustrated this perfectly when he pointed to a patch of crown vetch growing on a steep slope 7km from the Mooi River toll plaza on the way to Durban. As crown vetch is a legume associated with nitrogen-forming rhizobium bacteria nodules on the roots, the vegetation would have more than enough N to form the maximum amount of humus from the carbon (C)content of this material.

Non-leguminous weeds growing in the same location would contribute much less to C-building and would rely on N present in rain and free-living micro-organisms for its supply. This, of course, would be substantially less than with the vetch. As a result, the humus build-up would be far slower and peak at a much lower level.

What many farmers do not realise is that the environment provided by humus to host beneficial soil organisms, together with the plants feeding these organisms, will make many soil minerals that were hitherto in an unattainable form available to the plant.

Huge reserves of minerals are tied up in the soil but are not available for plants to use. Sensing this, the plant produces sugary exudates for feeding bacteria in the rhizosphere (the area in close proximity to the roots). Between 30% to 50% of the energy that plants convert from the sun during photosynthesis is used for feeding these soil organisms. This shows how crucial it is to the plant; if it were not so, the plant would have used this energy for physical growth.

Microbial activity
Plants are even able to produce specific exudates to favour the bacteria that specialise in making certain minerals available to them. At my facility, the soil’s humus content was 3,24% and the soil phosphorous (P) level was 149ppm. After four years of having not applied any fertilisation, either chemical or organic, but practising no-till and with one winter crop of vetch, the P content had risen 276ppm, while zinc went from 14,01% to 25,55%. This was solely due to soil microbial activity.

Fair tested the humus content in the Mooi River cutting where the crown vetch was growing and found it to be 5,2%. Where there was no vetch, the humus content was 1,3%. In this case, there was an increase of two-thirds of P, while many other micro-elements had increased by substantially more than this.

John cited another case near Ficksburg, where crown vetch was growing on red shale and the P content was four times higher where the vetch was. The humus content was 3,5% with vetch and 1,5% without vetch.

Economically important
We generally associate the value of humus with water-holding capacity, loose soil and so forth. But few see how economically important humus is to creating an environment where minerals that we would otherwise have to buy are made available.

Grain farmers without legumes in rotation are losing out on humus if they do not add the extra N, as described in a previous article, for maximum humus formation. This is not wasted even though it is in excess of the following crop’s requirements. It is safely stored away in humus with the additional benefit of having minerals converted to an available form. This applies to both no-till and tillage, but the benefits are increased with no-till.

Good for all
There is also an environmental issue here. The more humus we can develop in our soils, the more C we remove from the atmosphere. Furthermore, we also contribute to pollution reduction by lowering the amount of nutrients seeping into groundwater and streams. We also prevent or reduce soil loss from wind and rain erosion.