I was reminded recently that many of the challenges faced by our country’s farmers are, if not universal, at least shared by others in Southern Africa.

The 4th annual Silo Symposium and Expo took place in Maseru, Lesotho, from 20 to 22 September. This was my first introduction to farming in the mountain kingdom, but many of the concerns raised by farmers during discussion were very familiar indeed.

Like the roads in its capital city, farming in Lesotho lacks direction and upkeep.

There is no question that Basotho farmers are passionate about what they do and eager to learn and improve their production practices, but since the country’s agricultural sector consists mainly of subsistence farming on communal land, it difficult to coordinate industry-wide development that will make farming a sustainable livelihood generator for the rural poor.

One of the main themes of the symposium was exploring the potential of a veterinary fund scheme for Lesotho. According to Tjonane Matla, editor of The Silo, Lesotho’s only magazine dedicated to agricultural reporting, there are about two million Merino sheep, one million Angora goats and 700 000 head of cattle in the country – a total of 3,7 million animals.

Yet only 26 veterinary personnel, of whom fewer than 10 are veterinarians, are on hand to care for them.

“This simply means that after 50 years of our independence, we’re satisfied with the fact that a sick animal dies, and this becomes a free meal for the villagers,” said Matla.

The recipient of the Silo Editor’s Award, for a person who has made a major contribution to advancing agriculture in Lesotho, was awarded to 81-year-old farmer, Mojalefa Lephole.

Lephole is, amongst other things, a qualified veterinary assistant. He said that he had had no option but to close his veterinary clinic because Basotho farmers were not “in the culture of procuring veterinary services”.

Another challenge that farmers in Lesotho face is stock theft. Unfortunately, there are no reliable statistics on the economic loss to the sector caused by these crimes. During the panel discussion, one farmer expressed the opinion that the loss of stock due to theft was not really an economic loss for the country, because while the farmer might lose an asset, the thief gains one.

So no real loss is suffered on a national level. This may seem logical at face value, but of course it ignores the suffering of those farmers who lose their animals and the fact that it skews the economy severely, as the asset is gained without work or inputs.

As in many areas in South Africa, Lesotho’s communal farmers are the perpetrators and victims of catastrophic overgrazing.

One farmer suggested that overgrazing be punished with steep fines because it was effectively a crime that affected the entire population. 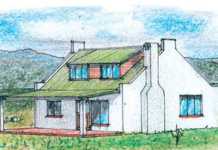 5 cottage designs to choose from