Sunflower’s consistent yield and drought-tolerance make it an attractive crop for SA’s dryland regions. It also has a relatively long planting window. Nonetheless, care should be taken to plant at the optimal time, cautions Dr Safiah Ma’Ali, senior researcher at ARC-Grain Crops Institute. 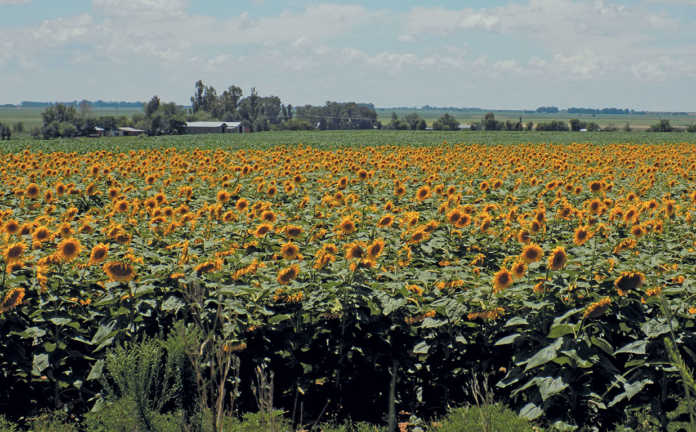 Over the years, sunflower has come to be considered an ideal low-input crop for South Africa’s marginal cropping conditions.

It is currently the country’s third-largest grain crop after maize and wheat, and is primarily used for the manufacture of oil for human consumption and oilcake for animal feed.

The plants are particularly efficient at extracting water from the soil, especially sandy loam.

This is underscored by the surprisingly high yields realised compared with those of other crops during the 2014/2015 drought.

Unlike other grain crops, sunflower has a relatively long planting window from early November to late January. But this can be misleading. It is important to choose the planting time carefully to ensure a good plant population.

The Agricultural Reseach Council’s Grain Crops Institute in Potchefstroom (ARC-GCI) has been conducting research on sunflower planting dates since 2007, which has demonstrated the importance of planting date for producing maximum yield.

Growth Stages
To better understand the effect of planting date on yield, each of the growth stages must be carefully considered: planting to floral initiation (GS1); floral initiation to bloom (GS2); and bloom to physiological maturity (GS3).

The yield components of sunflower, namely heads per hectare, number of seeds per head and weight per seed, are determined during these phases.

GS1: planting to floral initiation
This begins when the seed is planted and ends when the floral parts of the sunflower are initiated. Floral initiation cannot be observed directly; it occurs between the 10-leaf and 14-leaf stages. In GS1, sunflower is at its most delicate and is highly sensitive to stress. Fortunately, stress occurring during this period has little effect on yield. The plant must remain alive only to maintain the yield component of heads/ha.

GS2: floral initiation to bloom
Although the start of this growth stage is not readily recognisable, it determines the final yield. The floral parts, which later become the harvested seeds, are formed during this phase. After the seeds are initiated, they expand to form the visible bud and, eventually, the sunflower head, which blooms and thus completes GS2.

Drought stress during this stage reduces yield more than at any other phase of sunflower development.

Stress during GS3 can reduce yield, but not usually to the same extent as the reduction during GS2, as seed weight is a relatively smaller contributor to yield than seed number under most conditions.

Moisture
Ultimately, soil moisture, the most limiting yield factor, determines the planting date. Obviously, it’s difficult to predict when and how much rain will be received, so long-term averages are important (see Figure 1). It should be pointed out, however, that such data and yield are often unrelated. Even moderate amounts of rainfall received at critical stages of growth, such as the first phase of GS2, can stimulate yield potential.

All the same, the graph clearly indicates that yield generally decreases the later the crop is planted after the period of maximum rainfall.

Another factor affecting sunflower stand is poor germination due to excessive heat at the time of planting.

Sunflower sometimes has to be planted in January or even early February, and temperatures 2017during this period often reach 32°C to 35°C.

Temperatures in this range are not ideal for sunflower seed germination. Even when seeds germinate, high temperatures may cause them to wither and die.

In addition, topsoil tends to dry out rapidly in the heat, so farmers are forced to plant the seeds slightly deeper when soil moisture content is higher. This can be risky, however; a single hard shower of rain after planting can cause a thick crust to form and the seedlings will be unlikely to emerge.

The right time
To reiterate, it’s important for producers to choose the planting time carefully and ensure a good plant population.

For the past 10 cropping seasons, seed yield from 38 national sunflower cultivar trials planted by ARC-GCI in Potchefstroom has been evaluated under three separate planting dates (1 to 30 November, 1 to 30 December and 1 to 30 January).

The results indicated that seed yield was reduced by approximately 0,21t/ ha for each 30-day delay in planting after November (see Figure 2). The results showed that the probability of obtaining higher yield under a specific yield threshold (>1,2t/ha) was lower when the crop was planted after December (see Figure 3). Put another way, sunflower planted later in the season, especially during January, will have a lower yield potential. A farmer planning to plant sunflower as a main crop should consider planting during November and no later than the end of December in order to reach the target yield of more than 2t/ha.