A type of kweek grass, called couch paspalum (Paspalum distichum), is gaining a foothold on many vegetable farms. Also known as ‘kweek paspalum’, many farmers confuse it with common kweek (Cynodon spp.). 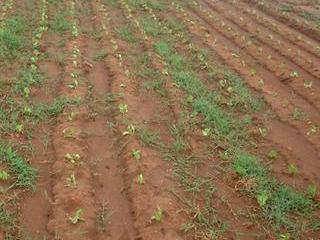 However, paspalum is far more invasive than cynodon on vegetable farms and grows quickly after irrigation. It is often found on verges and roadways between lands. Here it can serve as an erosion control agent, as it forms a strong mat of lawn-like material. Paspalum has a deep root system and produces abundant seeds from two racemes about 7cm long. These seeds can establish a new stand very quickly.

Paspalum can be introduced into lands by flowing water or by adhering to muddy shoes, while tined implements often hook onto and drag runners into the land, where they take root. Mechanical cultivation does little to control the weed. More often than not, it spreads the grass even further. As with grasses such as kikuyu, each section of material severed from the original plant has the capacity to start a new plant.

A serious weed
Hand hoeing is not effective, as only the top of the plant is removed, leaving the root system intact. This grass can be a serious weed and I know cases where a lot of money had to be spent eradicating it. Where it’s taken a foothold and allowed to seed between the growing crop, the seeds will germinate later even if the existing grass is killed off by a herbicide after harvesting the crop.

A common error is to disc or plough in this grass while preparing for the next crop. The land may look ‘clean’ afterwards, but the grass, which will have been cut into small pieces, will start to grow again shortly after irrigation. The best course of action is to prevent it becoming established in the first place by eliminating any small pockets as soon as you spot them.

This can be done by spot spraying with a knapsack sprayer with a selective herbicide when growing broad-leafed crops. Further infestation can be eliminated by spraying roads and verges. This isn’t a once-off exercise, as there will be residual seed which will germinate later on.

Erosion
If kweek paspalum has been protecting slopes from erosion, another grass can be established in its place. Bermuda grass (Cynodon dactylon) is one option. It’s easily established and also rather resistant to Glyphosate. If the kweek paspalum attempts to re-establish itself, a weaker dose of the herbicide will destroy it without affecting the Bermuda grass. Where paspalum is established in the land, consider an overall spray of a dedicated grass herbicide, or use spot spray treatments, depending on how much weed there is.

If the dry season is approaching and if the land is not to be used in a hurry, you can do repeat cultivations to dry out the runners. This will do nothing to remaining seed, but if you select a crop where you can use a herbicide that controls grasses well, you can prevent germination. Butisan on cabbages would serve this purpose. The important thing to remember is that once you decide to eliminate this pest you’ll have to do the job properly.

All too often a farmer will start off well, then when the threat has diminished to a point where it’s no longer an immediate problem, he is distracted by other farming issues and relaxes his control, thereby undoing all the good work up to that point.

Contact Bill Kerr on 016 366 0616, or at [email protected]. Please state ‘Vegetable production’ in the subject line
of your email.