Cabbage is vulnerable to several diseases. All can be controlled to a greater or lesser extent, but in some cases the only solution is to plant a resistant variety.

This article examines nine common diseases that affect cabbage, and the methods of controlling them. Take note that these approaches differ widely; what works in one case may be ineffective in another.

Black rot (Xanthomonas campestris)
Arguably the most important cabbage disease, black rot is introduced via seed to the land, where it spreads rapidly under hot, rainy, windy conditions. It survives for three to five years in lands and in the stems of host plants.

The inital symptoms are yellow to light-brown patches at the leaf margins; later, a network of black veins develops within these areas. Infected areas turn brown and dry out, often leaving a triangular lesion on the leaf margin, with one point of the triangle pointing to the midrib.

The vascular tissue turns brown as the bacteria move into the main veins and vascular system. Plants infected at the seedling stage may die or remain stunted.

Control:
– Plant tolerant or resistant cultivars;
– Use disease-free seed;
– Practise crop rotation;
– Avoid the use of sprinkler irrigation, and increase the interval between irrigations;
– Deep-plough all infected plant material.

Control:
– Use treated seed and sterilise the seedbed before planting;
– Remove infected plants when symptoms appear.

Sclerotinia rot or white mould (Sclerotinia sclerotiorum)
Cool, wet conditions favour this disease. It is caused by a fungus that can survive for two to three years in the soil. The parts of the infected plant above the ground may be covered in a white, cottony growth, and the tissue beneath the mould turns soft and watery.

Clubroot (Plasmodiophora brassicae)
This disease is soil-borne and the spores can survive in the soil for up to 20 years. It is most severe in acid or moderate pH soil that is poorly drained or has a high clay content.

Infected plants are stunted, wilted and have purple leaves. The roots develop large, elongated or rounded swellings (‘clubs’) that rot and form a wet, foul-smelling mass.

Fusarium wilt or cabbage yellows (Fusarium oxysporum f. sp. conglutinans)
Fusarium wilt is more prevalent in summer, but the fungus persists indefinitely in the soil. Initially the symptoms appear as yellow foliage, often mainly on one side of the plant. The leaves become distorted, gradually turn brown and drop prematurely. The vascular (veinous) areas also discolour.

Downy mildew (Peronospera parasitica)
Downy mildew is common in cool, humid weather. The fungus survives in debris and is spread by airborne spores.

Infected leaves look as if they have been lightly sprinkled with pepper, and the leaves become yellow around the ‘pepper’ spots. Lesions merge to cover large areas of the leaves. Fine, fluffy, white mould appears on the lesions on the underside of the leaf during humid conditions.

Control:
– Do not irrigate the plants between 3pm and 10am;
– Treat seedlings with fungicides;
– Fumigate the seedbed;
– Prepare and manage the seedbed well to ensure good aeration and drying.

Black leg (Phoma lingam)
Black leg is seed-borne and can infect the entire seedbed when an infected seed germinates. When infected, the plant wilts and lesions appear on the stem and leaves.

These are white to light-brown with small, black dots in the centre and a purple-black margin.

Bacterial leaf spot (Pseudomonas syringae pv. maculicola)
This disease is more severe in cool, moist weather. The symptoms are initially small, faint, water-soaked areas on the underside of leaves, and these develop into brownish to purplish grey necrotic spots after a few days. They may join up to form large, irregularly shaped spots. 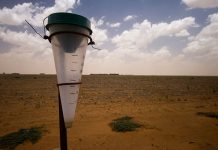