Despite its name, the Mediterranean fruit fly is thought to have originated in sub-Saharan Africa. But it has now spread over the entire continent, as well as Asia, Europe, Australia, and the Americas.

Scientific name: Ceratitis capitata
Family: Tephritidae
Distribution: Despite its name, the Mediterranean fruit fly is thought to have originated in sub-Saharan Africa. But it has now spread over the entire continent, as well as Asia, Europe, Australia, and the Americas.

The adult is a small fly with a wingspan of 6mm. It is yellowish-brown with an iridescent blue sheen. The transparent wings are broad and marked with yellow and brown spots or banding on the margins. The wings extend beyond the rear of the abdomen. The Mediterranean fruit fly is one of the most destructive of all fruit pests, partly because it is highly adaptable and able to tolerate cooler climates better than any other fruit fly species. It utilises more than 250 species of fruits, vegetables, flowers and nuts.

The female punctures the skin of the fruit with its long ovipositor and lays eggs just beneath the surface. In the process, it introduces gut flora from itself into the eggs. This causes the flesh around the eggs to rot and become pulpy and the skin turns brown. When the eggs hatch, the developing larvae begin to feed on the pulpy flesh. These mushy areas make the fruit commercially unviable. At about the time the larvae are due to hatch, the decaying fruit falls to the ground, where it attracts swarms of flies.

Reproduction
The female lays five to six small white eggs and may lay up to three batches a day. Incubation takes one to two days. The small white larvae, or maggots, will remain in the fruit, feeding on the flesh for between five and 15 days before chewing a hole in the skin and falling to the ground. Here they will pupate (turn into an adult). The reddish-brown pupae are about the size of a grain of cooked rice. Depending on the temperature, pupation takes 10 to 15 days. Under favourable conditions a fruit fly can live for up to six months.

This series is a guide to identifying pests. The control methods discussed are merely suggestions. For help with area- or crop-specific control, consult an agricultural extension officer.

Paul Donovan is a biologist who has worked with reptiles and insects for more than 30 years in zoological collections in the UK. He is currently based in Botswana, where he advises farmers on the use of biological control agents. Email him at [email protected]. 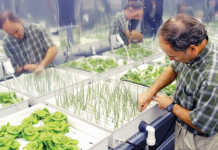