Providing feed and water for game animals can be challenging, as some methods may cause injury. Here are some helpful tips for setting up feed and water troughs, as well as building a crush.

There are a number of methods of providing fodder and water to game in captivity, with some being far better than others.

Fodder
Hayracks should be avoided, as the animals tend to bump against them and injure themselves. Rather place the fodder directly on the ground or in a low trough. Most grazers prefer feeding on or near the ground.

Do not put the fodder on the ground if the surface is wet or muddy. In areas where rain might occur during the trapping and accommodation period, place the fodder under cover.

In large camps with many animals, place the fodder in the centre of the camp. If there are many young animals in the group, place it in a number of locations to prevent victimisation.

Wooden, plastic or concrete feed troughs are smoother and hence safer than steel. If using a steel trough, make sure that its sides are smooth and covered with rubber to prevent injury.

Water troughs
The provision of water can be difficult. Freestanding water troughs are impractical. Animals move them around, spilling water in the process. They can also injure themselves by bumping against the troughs.

If you use plastic or rubber containers, place them in the corners of the camp, so that they can be removed regularly for cleaning.

A sunken cement basin of at least 50ℓ is best. Extend a section of the basin outside the perimeter of the camp so that you can empty and clean it regularly without disturbing the animals.

Water troughs should not have sharp edges or corners on which animals can injure themselves. Never use cut metal drums with sharp edges.

The crush
A crush is recommended for the following, amongst others:

Erect the crush in the same way as a boma.

The one side of the crush should consist of a 63mm pipe with a 0,5m brick wall below. Attach a plastic curtain that covers the pipe. The curtain can be pulled away as soon as the animals are in the crush to give the handler access to the animal, which can then be treated. 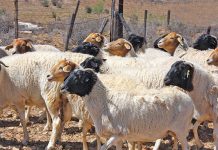