Home Farm Basics How to Livestock Keep your broilers cool

Follow these tips provided by the Livestock Research and Innovation Institute of the Limpopo Department of Agriculture to reduce the effect of summer’s high temperatures on broiler houses.

Things can get really hot for broiler chickens during summer in Limpopo (and elsewhere, of course). This is especially the case when broiler farmers use open-sided chicken houses, where temperature control is more difficult. As the ambient
(or room) temperature increases, the chickens find it increasingly tough to cool themselves down. As the outside temperature climbs and the room temperature continues to rise, the chickens stop moving about and eat less.

Body weight will drop and high mortality rates can be expected. All of this has a considerable negative effect on the bottom line of a broiler production enterprise. How, then, can farmers counteract the threat of rising summer temperatures, especially in circumstances where it is difficult to fully control the broiler house temperature, as is the case with larger producers?

Thermo- regulation
The first step is to understand how chickens control their body temperature. When they start to feel hot, they cool themselves down by panting, which is effective. But if temperatures rise, the birds pant more and so their respiration rate increases. As they inhale and exhale faster and faster, the effort increases their body temperature. When the body absorbs or produces more heat than it can get rid of, the result is a very serious condition called hypothermia, or heat stress.

Heat stress affects the bird’s metabolic processes, including nutrient digestion, leading to poor weight gain and a low feed conversion ratio. With prolonged panting, broilers become dehydrated and experience a rapid loss of carbon dioxide from the blood and tissues, as this gas is exhaled during panting. Rapid carbon dioxide loss changes the blood, reducing the amount of minerals (including calcium) it can carry through the body. The increase in body temperature, coupled with the change in the composition of the blood, eventually leads to the collapse and death of the birds.

Countering heat stress
Ways to keep your broilers as cool as possible include:

Note
These strategies are recommended only for reducing the effect of high ambient temperatures on broilers during summer. The broiler enterprise manager must still ensure there is proper ventilation and oversee heat release operations as a matter of course in naturally ventilated houses. 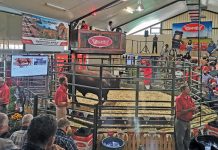