By manipulating environmental conditions, and paying equal attention to temperature and humidity, greenhouse growers can improve the quality of their crops and maximise yields.

Greenhouse climate control involves optimising the elements to maximise yield at the lowest possible cost, and to do this properly, growers need to understand the effect of vapour pressure deficit (VPD) on plant growth.

This is according to Deon van Rooyen, commercial manager at Vegtech Netafim and a speaker at a Netafim South Africa seminar held in Stellenbosch in November.

VPD, explains Van Rooyen, is the difference between the amount of moisture within a plant’s leaves and the air surrounding the plant. It drives various plant processes, such as transpiration, the opening of stomata, and the uptake of carbon dioxide (CO₂) and nutrients.

“By managing respiration rate through VPD, one cannot only optimise plant growth, but ensure that plants stay stress-free and thus healthier. The process further optimises nutrient uptake, resulting in better yields,” he says.

Temperature plus humidity
Optimal VPD is achieved through the management of the humidity and temperature in greenhouse or tunnel structures.

“When it comes to climate control, growers are normally more focused on temperature
than relative humidity, which refers to the amount of water vapour in the air. Humidity, nevertheless, has a much greater impact on plant health and growth than temperature has. Both should therefore be taken into account when using VPD to manipulate plant growth,” says Van Rooyen.

He adds that it means little to know the temperature in an undercover structure without knowing the humidity levels at that temperature.

Unfortunately, there is no ideal VPD setting, as it fluctuates in accordance with relative humidity and temperatures.

“You can’t measure humidity [levels] and temperatures in January and then set the VPD for the rest of the year, as variations between seasons, day and night, and different phases of plant development all have to be taken into account.”

Aside from this, different crops thrive in different VPD ranges, and these also differ from one growth phase to another.

The goal with VPD, therefore, is to keep it in the sweet spot, depending on the type of crop produced, its stage of development, the temperature and relative humidity. Broadly speaking, according to Van Rooyen, the recommended VPD for most crops ranges from relative humidity levels of 60% to 80% and temperatures of 18°C to 28°C, with a 10°C difference between day and night temperatures (see table). 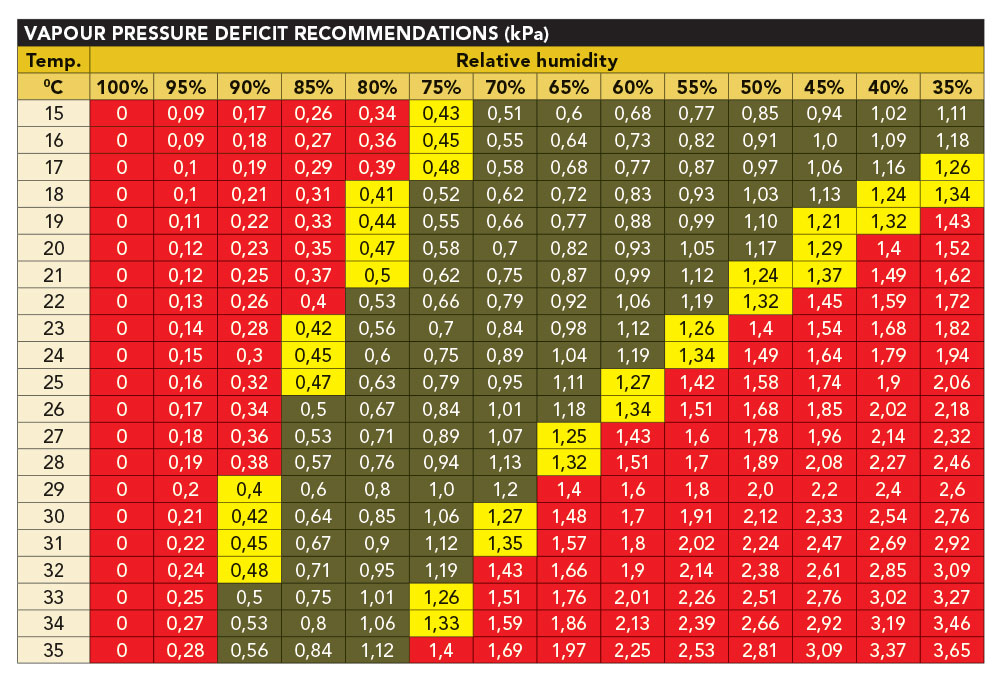 The exception is cannabis, where humidity levels of 45% to 50% are preferred due to the flowers’ high susceptibility to mildew.

Another factor that has to be considered is dew point, which relates to the amount of water that air molecules can hold at certain temperatures.

Exceeding dew point causes condensation and the release of free water, which, in turn, increases the risk of the development of fungal diseases.

“You have the same origin of disease, but environmental differences result in different outcomes,” says Van Rooyen.

Humidity also influences the uptake of certain nutrients. Calcium and magnesium compete with one another, with the uptake of the former being negatively affected when the humidity level is low and transpiration high. This can lead to a calcium deficiency and, in effect, diseases such as blossom end rot in tomatoes and peppers.

Climate Control
The ideal would be the ability to manipulate VPD through the use of a computerised system in greenhouses and tunnels that automatically adjusts environmental parameters that influence temperature and relative humidity.

“Unfortunately, we’re not there yet,” admits Van Rooyen. “The latest controllers, at best, have a setting to measure VPD or alert growers when the VPD level falls out of a certain range.”

Greenhouse design
Tools that a grower can use to manipulate temperature and relative humidity include heating, ventilation, air circulation, cooling and lighting. Nonetheless, everything starts with the design of the greenhouse, which includes the layout, orientation and materials used.

When these are suitable, it is easier to manipulate the ambient factors at a low cost. To illustrate, photoselective plastic can be used to manipulate the light that enters the greenhouse, and in turn this could help to lower or raise temperatures.

“The ideal is a plastic that filters one-third blue and two-thirds red light, as photosynthetically active radiation [the amount of light available for photosynthesis] ranges between wavelengths of 400 nanometres (nm) to 700nm,” says Van Rooyen.

He cautions that greenhouse plastic that filters ultraviolet (UV) light should be considered carefully, as bees use this light to navigate, and its absence negatively affects pollination. At the same time, problem insects and micro-organisms also have navigation issues in the absence of UV light, so its omission could be used as a pest management tool.

“For pollination, growers in Europe are fortunate to be able to use bumblebees, which are less affected by the absence of UV light. A blueberry grower in Namibia has used them in his greenhouse and found them to be 20% to 30% better pollinators at low UV settings than ordinary bees,” says Van Rooyen.

The plastic should also be anti-drip to prevent the formation of water molecules on its surface, as they would reflect sunlight. “[Any] light remains important, even though we are in a country where we have lots of it.

Air vents can be opened to trap hot air or allow it to escape from the greenhouse, while ‘wet walls’ can be used to reduce the temperature of the air as it moves over special cooling pads and also increases humidity.

Mixing air
The mixing of air is important to achieve uniformity, and can be used to raise temperatures when necessary by mixing warm air trapped in the roof with the rest of the air in the greenhouse.

The air can be mixed into the greenhouse via different means, but Van Rooyen explains that he prefers laminar flow fans, as used with cooling pads, to turbulent fans.

The latter operate at a far greater air speed, which breaks up the microclimate around the leaves of the plant and results in increased transpiration. This, in turn, raises humidity once more.

“If you’re going to use [turbulent] fans, you need to consider their impact on the plants and rather use them over shorter periods,” advises Van Rooyen.

Foggers increase humidity levels by releasing fine droplets of water. “The finer the droplets, the better. To prevent fungal problems, the water should evaporate before it reaches the plants.”

Heating systems
Van Rooyen says that most farmers want to use heating in their greenhouses, but it’s extremely expensive. He has calculated that it costs about R2 000/day to operate a 95kW heater that runs on 7kg gas/hr. Thus, cooling is much cheaper than heating.

“Before using heat, you need to determine whether it’s worth the cost financially. To save costs, use it as an add-on and not the sole source of temperature manipulation. And if you’re going to rely on Eskom for power, consider the potential effect of load-shedding on your system and make plans to alleviate it.”

Instead, a farmer can look at the minimum ambient temperatures in his or her region during different times of the season, and plan production around that. For example, instead of planting peppers, which are negatively affected by temperatures below 18°C, tomatoes can be planted, as these can flourish in temperatures above 12°C.

A hot-water system is a more efficient way of heating a greenhouse. However, it comes at a higher capital expenditure.

Van Rooyen mentions one grower who used paraffin to heat his irrigation water above 20°C in winter. Not only did it help to increase temperatures, but it also benefited plants by increasing CO₂ levels from 300 to 800 parts per million.

Lights can also be used to manipulate day length and temperature, but the expense is exorbitant.

“While European growers have been using lighting for many years because of the low light [in the region], it’s relatively new [in South Africa] due to our high light conditions. Most growers here still use high-pressure sodium [vapour] lights, as LED lights are still more than three times more expensive.”

Humidity levels will therefore be at their highest at daybreak.

“Once you understand this, you can use curtains and other tools in your greenhouse to maintain humidity levels.”