Conference season kicked off on Wednesday, 11 September, with Potatoes SA’s congress in Johannesburg, and what a pleasant day it was! CEO Andre Jooste said farmers had requested more participation this year and that’s exactly what they got.

A few keynote speakers had their chance to state their case and then the topic was given over to the on-stage panel to debate.

This was when things got really interesting. The panel consisted of industry experts, an academic and a farmer. The latter was able to give his perspective and advice on how to deal with the issue at hand.

This is surely what most farmers want to hear: what the other guy is doing and how he’s overcoming the same problem you’re faced with on the farm.

Probably the most entertaining was Jeff Kola, an enterprising ‘development farmer’ from the Free State. Jeff says he’s not an ‘emerging farmer’, because an emerging farmer is someone “who gets from government, sit and eats all day”.

Jeff Kola doesn’t call himself an emerging farmer. Says that’s someone who just gets from Gov and eats and sits #PSAcong

He was able to highlight many issues faced by farmers (like providing costly all expenses paid accommodation to farm labourers and their extended families) that many other farmers would be too politically sensitive to mention. But the crowd clearly agreed with his sentiments.

Jeff Kola: biggest prob when he started farming was high cost of free elec, water for labourers. “Everyone has rights, but I have to pay”

Andre himself kept his speech very short, much to my disappointment. I think he’s someone with a lot to say and should be heard out at all costs. The industry is certainly richer with him at the helm.

But his message came across clearly – “Get geared for change!” As far as conferences go, I couldn’t agree more. This kind of format might not be new, but it isn’t utilised enough. Especially not making farmers part of the panel.

Judging by the fact that the congress was packed – even past the dreaded graveyard shift – I’d say the attendees enjoyed it as much as I did! 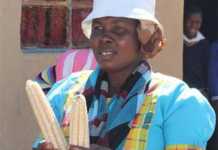 A round of applause for the agri sector!