Home » Opinion » By Invitation » Challenges to feeding a growing population

Global agriculture has to increase its output dramatically to meet the needs of a rapidly growing human population. John Hassell, Koch Agronomic Services’ customer support manager for Europe, the Middle East and Africa, highlights the challenges and urgently required solutions for meeting this unprecedented demand. 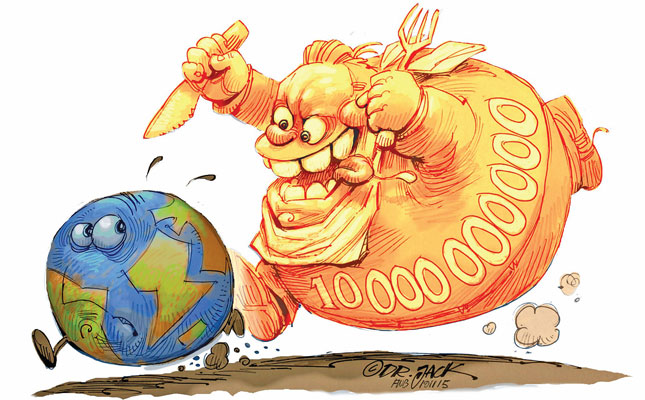 It has taken humankind 10 000 years of agricultural development to produce the quantities of food, feed, fibre and fuel (4Fs) that we do today. Yet the world will have to double its current agricultural output to meet the 4F needs of 2050.

And 70% of these agricultural products will have to come from advanced technologies such as genetically modified crops, new fertiliser efficiency technologies, and smart farming equipment.

The challenges ahead of 2050 will be to reduce food waste and distribute agricultural products efficiently to people across the planet. Right now, we have enough of the 4Fs for everyone, but we’re already struggling to get these to all people.

By 2050, there are expected to be 10 billion people on the planet. This is an average annual increase (with projected deaths already factored in) of 82 million people, equating to four births a second.

If we think that our current 7,7 billion population is causing problems, just wait until we hit 10 billion. We already have poor and hungry people, and this is causing social problems.
On the other hand, the world’s middle class is growing, and disposable income is increasing with it.

China’s expanding middle class, for example, is demanding more protein as it can now afford to pay for it.

The huge problem of food waste
An ironic challenge to feeding, clothing and fuelling the world’s growing population is the problem of food waste. The US, Oceania, Europe and industrialised Asia are most guilty of this, not only at the consumer end of the agricultural value chain but at field-to-market level.

The Food and Agriculture Organization of the United Nations and the Save Food initiative report that the world loses or wastes 1,3 billion tons of agricultural production every year.

In developing countries, most of these losses are at the post-harvest and processing stages, while in industrialised countries most are at the retail and consumer stages. Sub-Saharan Africa alone loses 230 million tons of food annually.

A major problem with many modern consumers is that they expect to be supplied with visually appealing food.

The agricultural value chain caters to this instead of educating consumers that so-called ugly food has the very same nutritional value and flavour as perfect-looking food.

American agronomist and winner of the 1970 Nobel Peace Prize, the late Norman Borlaug, once said: ‘The first essential component of social justice is adequate food for all mankind. Food is the moral right of all who are born into this world.’

This is far easier said than done, however. The number of markets is insufficient;
many places have relatively few high-quality roads or railways to transport people or goods to markets; conflict and violence, where food has become a political issue, have increased; and food is often improperly distributed due to political and personal interests.

People who don’t understand agriculture and the resource challenges faced by the world often say that more land should be made available for the production of the 4Fs. What they are ignorant of is that the world’s 48 937 696km2 of existing and potentially arable land is divided into eight production classes.

Exacerbating the challenge of feeding a rapidly growing world population is the fact that 33% of the Earth’s land surface is a combination of natural desert and man-made desertification. This desertification negatively affects one billion people, half of whom are in Africa.

Desertification is enhanced by weather, and climate change is increasingly a driver of extreme weather events. Fred Below, a professor of plant physiology at the University of Illinois in the US, has found that weather is the largest determinant of final maize yield.

Unfortunately, apart from our efforts to minimise the causes of climate change, people cannot control the weather. What people most definitely can do to support increased production of the 4Fs is to conserve the Earth’s soil resources.

It is a scary thought that the world is currently losing soil at a rate of 24 billion tons a year, or 761t a second. The world’s croplands are shrinking by more than 10 million hectares a year. In China and India, soil is being lost 30 to 40 times faster than it is being naturally replenished.

Not only are we losing 4Fs-producing soils, but the run-off and its contents are polluting the freshwater resources that are also essential for producing the 4Fs.

It is encouraging to note that from being almost non-existent in 1974, conservation agriculture practices globally increased to cover 180,5 million hectares of arable lands by 2016. This equates to around 13% of the world’s total croplands, although 74% of these are in North and South America.

Unfortunately, the adoption of conservation agriculture practices across the rest of the world has been slow.

Also essential to achieving significantly increased 4Fs production are the development and ready availability of new and improved agricultural technologies, such as varieties of seed and drought- and herbicide-tolerant crops, and managing and applying nitrogen and other fertiliser resources more efficiently.

New technologies include the use of urease inhibitors with urea fertilisers, which could reduce farmers’ nitrogen losses from ammonia volatilisation by up to 40%.

In his book The Shack, William Paul Young wrote: ‘Our Earth is like a child who has grown up without parents, having no one to guide and direct her. Some have attempted to help her, but most have simply tried to use her.

Humans, who have been given the task to lovingly steer the world, instead plunder her with no consideration, other than their immediate needs. And they give little thought for their own children who will inherit their lack of love.

So they use her and abuse her with little consideration and then, when she shudders or blows her breath, they are offended and raise their fist at God.’

I believe that conservation is more than just a word; it’s a way of life and it’s forever. – Lloyd Phillips

Email John Hassell at [email protected]. Visit kochagronomicservices.com.
This article was transcribed and edited from a presentation given by Hassell to the 2019 No-Till Conference held at ATKV Drakensville in KwaZulu-Natal from 3 to 5 September 2019.