5shares Share0 Tweet0 Share1 Print2 Email2 It is not always appreciated that fertilisers have to be applied with precision in order to provide crops with the macro- and micro-nutrients they require to deliver optimum yields. In fact, if mistakes are made with the choice of fertiliser and its application method and rate, farmers can lose money […]

It is not always appreciated that fertilisers have to be applied with precision in order to provide crops with the macro- and micro-nutrients they require to deliver optimum yields. In fact, if mistakes are made with the choice of fertiliser and its application method and rate, farmers can lose money as well as bring about undesirable soil acidity levels and increased soil salinity.

Soil cover and organic content
At the same time, using inorganic fertiliser correctly cannot on its own provide the best soil environment for crops. Soils devoid of beneficial organic matter cannot help crops reach their full potential even if large quantities of inorganic fertilisers are applied. Soils low in clay content require no-till or conservation tillage methods, green manure crops, and as much crop residue in the lands as possible to build up organic matter (see Figure 1).

Studies have found that in soils with a 15% clay content, kikuyu pasture provides 3% organic carbon, annual ryegrass pasture provides just under 1,5%, and maize delivers just over 1%. In the KwaZulu-Natal Midlands, where soil clay content is typically over 45%, kikuyu pasture provides nearly 6% organic carbon, annual ryegrass pasture just under 5%, and maize 2,5%. It it is obvious that maize farmers must supplement this crop type’s contribution to soil’s organic matter by using the alternative methods already mentioned.

A study conducted by KwaZulu-Natal soil scientist Dr Mart Farina found that using crop residues to cover a maize land resulted in significant improvements to the yield of the following maize crop when compared with maize grown in uncovered soil (see Figure 2). During the 2007/2008 summer, during which 792mm of rain fell, the uncovered land yielded 16,12t/ha of maize while the covered land yielded 16,62t/ha – a 3% difference.

Dr Farina also found that a maize crop grown in soil that had previously had its soil cover burned off by a runaway fire yielded 3,1t/ha compared with 9,4t/ha yield of maize in a section of the same land that had not been burnt (see Figure 5). Also, it took 20l of water 52 minutes to infiltrate the burned section while it took just 11 minutes to infiltrate the unburned section.

Essential minerals
According to Smith, calcium is a critical mineral for strong and healthy crop growth because it acts like strong glue, binding plant cells together. A calcium deficiency not only results in structurally weaker plants but leads to stunted and weaker roots. Plants take up calcium from the soil mostly through points just behind the root tips (see Figure 6). They also require boron to improve root development, which, in turn, maximises uptake of calcium and other important nutrients, leading to higher crop yields.

“It’s important for potato farmers to note that it’s actually the potato plant’s stolon roots and tubers that directly absorb calcium from the soil,” explains Smith. “So if you’re feeding calcium to potatoes, it must be in the soil solution near the stolon roots and tubers. Foliar-applied calcium remains in a potato plant’s leaves while soil calcium absorbed by the plant’s main roots moves upwards towards the leaves. The calcium absorbed by the stolon roots and the tubers significantly protects against common and powdery scab, and black and silver scurf, as well as improving overall skin finish.”

As can be seen in Figure 7, calcium nitrate is the most water-soluble form of calcium – the maximum amount of calcium in the soil solution reaches about 190 000 parts per million (ppm) and only one litre of water is necessary to dissolve 1kg of calcium nitrate. This contrasts with the figures for calcium from gypsum (450ppm when 1kg of gypsum is dissolved in 412l of water) and for calcium from lime (100ppm when 66 000l of water are required to dissolve 1kg of lime).

Potassium
During an eight-year study, Dr Farina and his colleagues discovered that 125mg/l of exchangeable soil potassium achieved the best relative yield percentage in maize crops. For no-till crops, Smith advises that farmers apply no more than 80kg/ha of nitrogen and potassium fertiliser in a band application so as not to burn the seed. Any additional nitrogen and potassium requirements should then be applied by top-dressing as necessary.

Nitrogen
Nitrogen is an important soil nutrient for optimum crop growth. This is demonstrated by the fact that maize crops rotated with leguminous soya bean crops consistently produce bigger yields than maize on maize rotations. Perennial ryegrasses also perform better with adequate nitrogen concentrations in the plants. Smith says growth in perennial ryegrasses is optimised when leaf nitrogen concentration is approximately 3,5%, giving the ryegrass a crude protein (CP) content of 22%.

If 800kg/ha of perennial ryegrass with a 3,5% leaf nitrogen concentration is grazed, this equates to removing 28kg/ha of nitrogen from the pasture. If 1 300kg/ha is grazed, this removes 46kg/ha of nitrogen. The nitrogen that has been removed should be replaced through top-dressing, taking into account the mineralisation capacity of the particular soil. Smith explains that there is little or no mineralisation from soil organic matter in winter when the soil temperature drops below 5°C. “So continued nitrogen fertilisation of pastures during this period is essential,” he says. “In fact, Italian ryegrass responds best to nitrogen in winter and responds the least in September/October.” (See Figure 11.)

Quality changes
According to Smith, the quality of perennial ryegrass changes significantly over the various leaf stages (see Figure 12). As the plant grows back after grazing from the one-leaf to the three-leaf stage, the water-soluble carbohydrates (WSC) to CP% ratio swings from 1:2 at the one-leaf stage to 2:1 at the three-leaf stage. Likewise, the ratio of potassium/calcium plus magnesium in the leaves is normally far too high (>6), which makes the grass less palatable.

But as the plant matures and three leaves develop, this ratio falls below 2,2 which will not affect dry matter intake. Smith warns, however, that applying excessive nitrogen is a waste of money and also lowers the quality of pasture by decreasing non-structural carbohydrates and increasing nitrate levels. This results in less energy in the pasture, which decreases milk production. In addition, soil acidity increases. 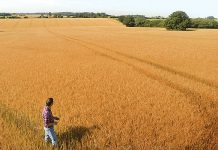 January 24, 2020
Consumer price inflation increased slightly from November to December 2019, but still remained at its lowest level in nearly a decade, and was expected to remain low throughout 2020.