Commercially farmed tilapia are all male, due to minute quantities of a hormone they are given early on in their lives, but they are perfectly safe to eat! 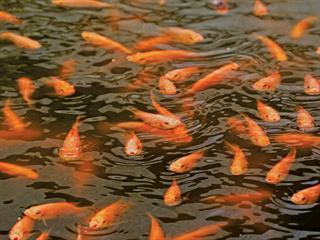 A recent Internet column claims that tilapia are more deadly to eat than pork, raising fears about the safety of farmed fish. The article was clearly based on a rudimentary knowledge of salmon rearing and had little factual basis. So, how safe to eat are tilapia from fish farms?

The mere mention of the word ‘hormone’ sends a section of the community into near hysteria, without any understanding of the facts. Tilapia raised commercially around the world are sexually ‘fixed’ as all-male fish through the use of minute amounts of 17-alpha-methyltestosterone (MT) in their feed during the first 18 days of their lives. This technique is used for two reasons: male tilapia greatly outgrow females, and reproduction in the grow-out environment is undesirable.

No threat
The fish are around 9mm long when they first feed on the special diet, and about 20mm long at the end of it, at which stage they weigh not more than 0,1g each. At this stage they are simply male fish, not ‘GM’, and not ‘transgenic’. For the rest of their lives until they are harvested at around 500g, they remain just male fish.

Scientific tests have proven that no detectable MT remains after 10 days post treatment. So, assuming that the harvest takes place nine months later, there is no threat whatsoever to the consumer. There are absolutely no artificial hormones left in the flesh of the animal consumed. In addition, the following explanations should be helpful:

Comparison with livestock
Only 10g of MT is required to convert one million fry, which means that each fry consumes only 0,01mg. The entire worldwide tilapia industry uses less than 100kg of MT annually to produce 3,5 million tons of tilapia. This compares with 7,1 tons of androgen hormones excreted by farm animals in the EU, and 4,4t in the USA.

None of the South African manufacturers of tilapia feed use growth steroids in their tilapia feeds. Only natural substances such as fish meal, soya, and other proteins are used. These fish are therefore among the safest animal products in the world that are intensively raised for human consumption, and the panic displayed is completely unfounded.