Is your horse in poor condition, despite receiving good food? Worms could be the problem, says Dr Mac.

The classic signs of a heavy worm burden can be misinterpreted as malnutrition. A horse may be small for its age, with a distended ‘pot belly’. It may be lethargic. Its coat may be rough and its musculature poor, despite a good appetite. The membranes of the eyes may be pale.

A diagnosis of worms is confirmed when, after the horse shows a mild colic, its manure contains a mixture of large and small strongyles (roundworms)and pinworms.

Strongyles
Large strongyles (Strongylinae), also known as bloodworms, are the most dangerous of the roundworms infecting horses. Some species migrate through the walls of the intestines into the horse’s tissues.

The species Strongylus vulgaris causes damage to the arteries, resulting in severe colic in later life.

Small strongyles (Cyathostominae) burrow into the intestinal walls and encyst, emerging much later – often all at the same time – as adults. Strongyles are most common in horses kept on pastures, and are not often seen in stabled, hay-fed horses.

In hot, dry weather, they may disappear from paddocks. They will not hatch under cool conditions, but the eggs survive until spring.

Pinworms
Pinworms (oxyuris equi) are considered less dangerous than strongyles as they do not migrate through the tissues. They remain in the hind gut, with female worms crawling out the of anus to lay their eggs at night in a sticky white gel that causes horses to rub their tails in irritation.

Balanced control
On a stud farm, parasite control is not always easy. A balanced approach is needed: rather than trying to kill every single worm in every horse, you should allow natural resistance to emerge. Unfortunately, in growing horses, the debilitating effects of high levels of intestinal worms can prevent this immunity from developing.

Various worm remedies are available, each effective against a particular species.

To make things more complicated still, resistance can build up if horses are dewormed too often. Recent studies show that most dewormers (except macrocyclic lactones such as ivermectin and moxidectin) affect only adult worms.

When to deworm
Much discussion takes place online about the optimal time to deworm, and which dewormers to use in horses. The best method of worm control is to conduct a faecal egg count at least twice a year.

Early spring (September/October) and autumn (March/April) are probably the best times. Breeding herds with mares and foals on pasture are at high risk, and should be tested more often.

Deworming times and medications should be based on the type and number of worm eggs seen. 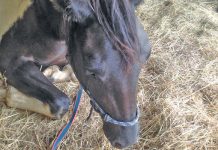