Home » Opinion » By Invitation » A shift in pace for land reform?

Speaking in parliament during the debate on the State of the Nation address, minister of Rural Development and Land Refom, Gugile Nkwinti, rejected claims that land reform had failed. 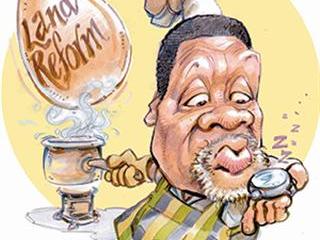 "The president explained in his State of the Nation address what government has undertaken to address income inequality, poverty and unemployment. With this in mind I want to reflect on land reform. Land reform has four pillars: redistribution, restitution, development and tenure reform. Until the establishment of the new Department of Rural Development and Land Reform in 2009, land reform had been interpreted to refer to the first two pillars.

The result has been a focus on the number of farms transferred from white owners to black claimants or beneficiaries of the land reform programmes. This was the basis on which the 2014 target of 30% was set; an amount that translates to 24,5 million hectares out of the 82 million hectares of agricultural land which was in the hands of white commercial farmers.

The development thrust was introduced in 2009, with the adoption of the Recapitalisation and Development Programme (Recap) and tenure reform strengthened by the Four-Tier Land Tenure System which was introduced through the Green Paper approved by Cabinet in 2011. Previous programmes, such as the Comprehensive Agricultural Support Programme and the Post-settlement Support Programme, were not designed as an integral part of land reform.

Notwithstanding the lack of targeted support from government, some beneficiaries developed their land with limited resources. Others got loans from Land Bank or commercial banks, which they could not service and consequently lost their land. The government has, since 2009, started reversing this trend.

Land reform progress
Farms transferred to black people and communities through the various redistribution programmes from 1994 to 31 January 2013 amounted to 4 813 farms, which translates to 4,1 million hectares, benefiting 230 886 people, of whom 50 440 were women (1,7 million hectares are in the hands of women); 32 563 were young people; and 674 were people with a disability.

To acquire this land, the state spent R12, 9 billion. Of the 4,1 million hectares acquired, the government has, since 2010, recapitalised 696 farms into full operation, employing 4 982 permanent workers, and investing R1,8 billion in infrastructure, inputs and strategic support. Of the 696 recapitalised farms, 332 are cropping farms and 364 are livestock farms. Gross income generated by these farms as at 31 January 2013 is R126 million.

Land acquired by the state for the restitution of land rights, since the inception of the programme (1995), amounts to 4 001 land parcels, translating into 1,4 million hectares. Of the beneficiaries of this land, 136 968 are female-headed households, and 672 are people with disabilities. A total of R16 billion has been spent on the programme thus far. This was spent settling 77 148 claims; R10 billion for land acquisition and R6 billion for 71 292 financial compensation claims. The 5 856 settled claims, translating into 1,4 million hectares, is land restored. This clearly shows that claimants have chosen financial compensation over land restoration.

Land tenure system
It is clear that through the restitution process, the state was a compelled buyer. Prices in restitution were far higher than those paid in terms of strategic land acquisitions under the redistribution programme. This is an indication that where the state is able to strategically acquire land, it can do so for less money, as it is not a compelled buyer. But we could have bought more (land) if the principle of just and equitable redistribution was actively applied.

In terms of the new land tenure system for the country, we are introducing the following, namely: state and public land, leasehold; private land, freehold, with limited extent; foreign land ownership, leasehold; and, communal tenure, with institutionalised use-rights.

The act destroyed a fledging class of African farmers, it destroyed the environment (through overpopulation, overgrazing, and deforestation) and it placed black people in a situation of abject and grinding poverty. To reverse this legacy means rebuilding the class of black farmers, rebuilding the environment, and deepening production discipline for food security and sovereignty. The re-opening of the lodgement date and the exceptions to the 1913 Natives Land Act requires substantial preparatory work, which has commenced in earnest.

People will be assisted with a manual on land claims in the 11 official languages. Another component of the campaign is oral history which will be collected from those who have lived through the effects of the 1913 Natives Land Act. The 11 740-strong Narysec (National Rural Youth Service Corps) youth will distribute the manual and collect the oral history.

There are institutions that have come forward to be part of this campaign, including the SABC, Iziko Museums, Unisa, the National Heritage Council, the Departments of Justice, Public Works, Arts and Culture, and the Department of Woman, Children and Persons with Disabilities.

Not a failure
There is a perception that land reform has failed. Our contention is that it has been slow, but has not failed. We have completed the state and private land audit, and statistics indicate that approximately 26 million hectares is state land while 96 million hectares is privately owned. This means the state owns 22% of the land, while 78% is in private hands, which shows that South Africa has predominantly privately owned land. Outstanding in the audit process is the breakdown into nationality and race in the privately owned parcels or properties.

This is what the Office of the Land Valuer-General and the other institutions will address, through the use of the ‘just and equitable’ principle in accelerating the land reform process. In addition, the government will establish district land reform committees, as proposed in the NDP, to contribute to, and accelerate, sustainable land reform.

More support
In 2010, government introduced Recap, which provides emerging farmers with a range of support packages in terms of inputs, strategic support and infrastructure. Going forward, the government will establish the Rural Co-operatives Finance Facility (Rucoff), to provide financial and technical support to a fledgling class of smallholder farmers and co-operatives in commercial and communal land spaces." – Denene Erasmus