The SA fruit and nut markets are driven by global supply and demand. Ezra Steenkamp, deputy director of trade research at the Department of Agriculture, Forestry and Fisheries (DAFF), and an associate researcher at the department of agricultural economics at the University of Pretoria, discusses research findings on trade opportunities for the SA fruit and nut industries. 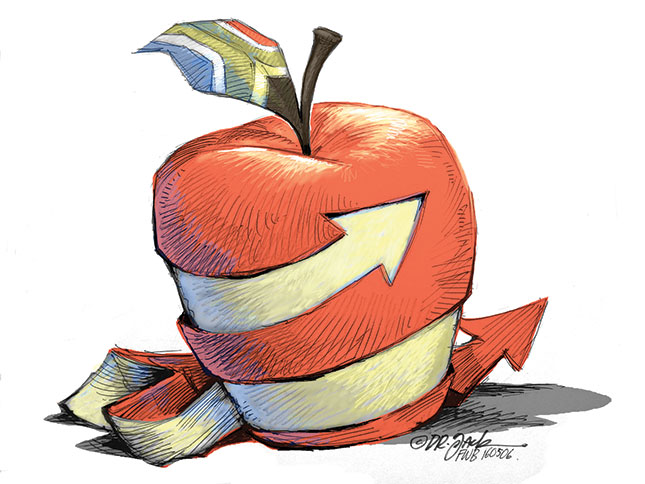 The fruit industry is the largest contributor, by value, to South African agricultural exports. The industry has a high job-multiplier effect and creates in excess of 400 000 jobs throughout the value chain. The industry is also an important generator of foreign currency inflows – about 90% of income derived from fruit earnings is from foreign exchange, with a total export value of approximately R22 billion. It is thus of national importance.

Fruit and nut demand is relatively resilient. Over the past decade, both these industries have performed exceptionally well, despite the global recession, with growth in trade surpassing that of the global average. With the right conditions and proper application of water technologies, plant improvement and the development and planting of new cultivars, they should grow substantially over the next two decades. However, this will be subject to a stable policy environment that ensures investor confidence.

New export opportunities
While traditional fruit crops such as citrus, table grapes and deciduous fruit still make up the bulk of the value and volume of fruit exports, new categories are growing fast. Exports of subtropical fruit and tree nuts are increasing at a rapid rate, as middle-income consumers in developed markets particularly are demanding more variety. Consumers in emerging markets, especially in Asia, are also increasing their consumption of fruit substantially.

A study by North-West University, in cooperation with DAFF and using the decision support model (DSM) to measure the potential in value of realistic current market opportunities based on historical performance, confirmed that the most immediate opportunities to expand fruit exports are Europe and the US.

The study identified 573 new global market opportunities (product/country combinations) for existing South African fruit products with a potential value of US$3 billion (R43 billion). About 80% of these are vested in only 10 products: fresh and dried grapes, apples, the fresh fruit category (such as litchis, granadillas and pomegranates), mandarins, lemons, peaches, berries (such as cranberries and blueberries), pineapples and macadamia nuts.

New export markets
All indications are that the fastest- growing emerging markets in the next five years for fresh produce will be China, India, Indonesia, Thailand, Vietnam and the Philippines. The fastest- growing markets among the developed economies are South Korea, Japan, Taiwan, Singapore and Hong Kong.

Analysis by Business Monitor International confirms that China has one of the most favourable ratings for opportunities and risks, as well as a better import penetration than most other Asian destinations. China also recently moved from a production- and investment-orientated economy to a more consumption-led economy that may further accelerate food imports.

India, with a population similar to that of China, is also an important potential growth market that will be able to absorb large volumes of produce in the future. However, its penetration of imports is still very low due to a lack of infrastructure and a restrictive regulatory and bureaucratic environment.

Eastern European countries have higher growth prospects than most of Western Europe. Priority countries in that region with favourable opportunities and risk for fresh produce imports are Russia, Poland, Romania and Turkey.

According to an analysis of various Marketline reports from Datamonitor, over a five-year period up to 2019 the highest expected growth for the fruit and vegetable markets will take place in Asia Pacific with 6,4% year-on-year growth, followed by Europe with 4,4% and the US with 2,2%.

The European market is more open to variety, and more opportunities exist to supply that market with a wide diversity. The Asian market, however, is important for the expansion of traditional fruit exports.

Terms of trade
While Asian markets offer a major growth opportunity, South Africa is at somewhat of a disadvantage compared with some of its competitors. This is due to the high rate of import tariffs charged by some Asian countries for fresh produce imports from South Africa. A quick calculation, based on the assumption that South Africa gains a 10% market share in key Asian destinations, results in additional import duties to the value of around R500 million.

For several product/market combinations, the most-favoured-nation (MFN) ad valorem tariff duty still remains very high; for avocados exported from South Africa to China it is 25%, for grape exports to Japan it is 17%, for apples to Taiwan it is 20%, for grapes to Thailand it is 43%, for macadamias to Vietnam it is 30%, and for macadamias and grapes to South Korea it is 45%.

Keep in mind, however, that transport costs to many Asian destinations are very affordable and a large share of the potential tariff disadvantage could be offset by these lower transport rates.

The water challenge
Exports of food can be seen as the export of accessible water, via developed infrastructure, from South Africa to those parts of the world with a high population, urban growth and rising incomes. China alone plans to relocate 250 million people in the next decade from rural to urban areas, and two new cities are built every year.

In addition to this trend, the global population will increase by one billion people by 2025. This will have a tremendous impact on global food demand and will make agriculture, especially in Africa, one of the fastest-growing sectors.

Many local issues affect the international competitiveness of South Africa’s fruit and nut industries and their ability to become major drivers in export-led growth. Water is one of these. South Africa is considered a water-stressed country and the application of smart water-use technology and the building of dams will determine the agriculture sector’s ability to sustain growth.

For the industry to double in size over the next decade, output needs to grow by about 10% year-on-year.

African opportunity
The number of middle income earners in Africa is not expected to increase substantially over the next five years, despite the record economic growth rates (from a very low base) of African countries. However, South Africa already has a strong presence on the continent through its expanding retail chains.

About 28% of South Africa’s apples, for example, are exported to Africa, of which the bulk goes to Nigeria.
Early indications of growth trends show that in conjunction with the growth in South African retail outlets in Africa, the continent can become an important export destination of fruit over the next decade. – Gerhard Uys