Home » Opinion » By Invitation » Why credit ratings matter, even to farmers

When South Africa’s credit rating was left intact just before the festive season, a cautious sigh of relief reverberated throughout South Africa’s financial markets and government corridors. Why are credit ratings so crucial and what would a downward revision mean to farmers? Jaco Visser looks at the importance of these measures. 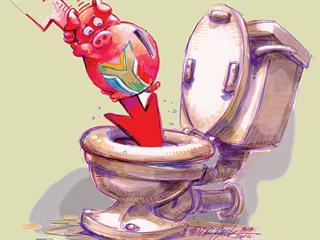 In mid-December, two of the world’s most authoritative credit rating agencies confirmed that South Africa’s grading had been retained at the BBB level. This means that government’s debt was still being viewed as investment grade. Before the announcement, some economic commentators had feared that the rating would be downgraded due to the challenges besetting South Africa.

Why is this important? South Africa relies on foreign investment in local bonds to plug the hole in the country’s current account deficit. This account can be regarded as South Africa’s cheque account for transacting with the rest of the world. When goods and services are exported or dividends are received from holdings in other countries, money flows into the account. Equally, when products are imported or dividends are paid to foreigners who hold local assets, money flows out of the account.

If more money flows out than into the country, a deficit opens up. This has been the case in South Africa for a number of years. To a large extent, the current account deficit dictates the value of the rand. If money flows out of the country, those taking out the money, whether importers or investors, need to sell rands to buy dollars, euros or pounds. The supply of rands in the market then increases and the currency weakens against other currencies.

The converse is also true. When money flows into the country, exporters or investors sell dollars, euros or pounds to buy rands, thus increasing the demand for the currency. This results in the rand strengthening against other currencies. Hence, it is important for foreigners to continue buying SA bonds and stocks, as this keeps the country’s inflow of money intact.

Foreign investors will only buy SA bonds if these debt instruments are of investment grade. The rating assigned to debt also determines the interest rate paid by the issuer.

Moody’s Investors Service, Standard & Poor’s, and Fitch Ratings are the world’s three dominant players in reviewing and rating bond issuers’ overall financial conditions to determine whether the bonds are investment grade. Ratings assigned to sovereign debt, or debt issued by governments, are based on numerous factors ranging from the strength and structure of the economy, to the political and societal dynamics of a country.

Economic growth remains the biggest drag on South Africa’s ratings outlook. The country’s real gross domestic product (GDP), or the value created in the economy, without taking the effect of inflation into account, grew on average by an anaemic 2,5% in the five years to 2014, according to Fitch Ratings. If the figure for population growth is discounted, the growth was only 1,3%, the agency said.

Government needs the economy to grow in order to earn more from taxes, as economic growth and tax revenues are positively correlated. Higher tax earnings mean that the state will be able to afford social welfare programmes and build new infrastructure. It will also enable government to pay back some of its debt.

When government spends more than it earns, the gap that opens up is called the budget deficit. Government must then issue bonds to raise funds in order to plug this gap. Offshore investors, however, will only buy bonds if they are investment grade.

Tax increases on the cards?
During his medium term budget policy statement delivered in October, finance minister Nhlanhla Nene hinted at tax increases this year to help balance government’s books. This could take the form of higher personal tax for the approximately six million taxpayers in South Africa, or an increase in value-added tax similar to that introduced in Japan last year. The latter is less likely to happen as it would be unpopular with labour unions, who would argue that the measure would hit the poorest the hardest.

The need to spend less
Fitch Ratings and Standard & Poor’s kept South Africa’s sovereign debt grading unchanged last month on the assumption that government would stick to more frugal spending in the current and following fiscal years. If government does not rein in its spending, it may face a downgrade.

As mentioned, a downgrade means that government has to borrow money in the market at higher interest rates. To pay these higher financing costs, spending in other areas will have to be curbed, including cutting the budgets of the Department of Agriculture, Forestry and Fisheries and the Department of Rural Development and Land Reform. Current programmes will probably suffer and in a worst-case scenario, land reform and restitution could slow down even further.

To pay the higher borrowing costs, government would need to boost tax income. This could prompt a cycle of tax increases, placing consumers under further strain and dampening the sluggish economic growth even further. Consumer spending makes up about two-thirds of GDP. A downgrade would also mean that many of the much-needed foreign currency inflows into South Africa’s bond market, and possibly the stock market, would decline rapidly.

Some investors would actually be forced to withdraw their money from the country to adhere to their own investment mandates which prohibit them from investing in below-investment grade debt.

The rand would weaken, leading to South Africa having to pay more for oil imports, resulting in a rise in diesel and petrol prices. To keep money flowing into the country’s bond market, an alternative would be to attract deposits. But to protect the rand from depreciating rapidly, the Reserve Bank would have to hike interest rates substantially. The vast majority of agricultural machinery and equipment used in South Africa is imported and paid for in dollars or euros. If the rand weakens, the price of these goods would shoot up. Farmers’ profitability would be hit hard, as a result of these higher interest rates.

The upside of a weaker rand is that exporters, and even grain farmers, would be cushioned by higher earnings. Higher interest rates would, however, probably negate the benefits of higher export earnings.

Politics and the power supply
Socio-political factors could also influence the credit-rating agencies’ appraisal of South Africa. Amongst these are strikes, failure of local government services and power shortages. Labour unrest almost brought the country’s mining and manufacturing industries to a standstill over the past two years. This has hurt business confidence and curtailed the expansion of job creation. It has also harmed economic growth, which in turn has had a negative impact on business confidence.

Companies are hoarding cash or paying dividends rather than setting up new factories or mines. Even farmers have been maintaining their capital base instead of expanding, partly due to low levels of confidence and partly because of uncertainty over land reform policy.

An increase in service delivery protests and demonstrations against local government corruption have made foreign investors nervous. Standard & Poor’s has warned that it might lower its rating of South Africa if “political tensions increase”. Power outages across the country over the last two months have also had a negative effect, resulting in production losses estimated at tens of billions of rand, and putting the brakes on quicker economic growth. Both Fitch Ratings and Standard & Poor’s have expressed concern about the impact of these outages.

For now, South Africa’s slide into non-investment grade territory has been delayed and credit rating agencies have given the country time to put its economy in order. Government needs to cut spending, make it easier to do business, straighten out problems at Eskom, and become more heavy handed with union demands for above-inflation wage increases.

Above all, the state has to provide clear guidance on land reform based on the free market principles contained in the National
Development Plan.