Rabies has killed thousands of kudus in Namibia since the 1970s, but years of research into methods to combat the often-devastating outbreaks have now yielded positive results.

Rabies has killed thousands of kudus in Namibia since the 1970s, but years of research into methods to combat the often-devastating outbreaks have now yielded positive results.

In the most recent study undertaken by the University of Namibia (UNAM), measurable antibodies were for the first time identified in a ruminant that received oral vaccination against rabies.

The aim of the study was to compare the different doses and methods of administration of the oral rabies vaccine in an attempt to elicit a measurable immune response in kudus.

Dr Rainer Hassel, study leader and lecturer at the School of Veterinary Medicine located at UNAM’s Neudamm campus near Windhoek, said in a statement that as part of the latest research the effectiveness of using “bait” containing the vaccine was also further investigated.

He said it was necessary to determine the extent to which kudus in natural veld conditions would consume the bait in order to ingest sufficient amounts of the oral vaccine.

“Kudus kept in the bomas at the veterinary school [on the Neudamm campus] in 2020 received high doses of oral vaccines, both by ingesting the vaccine naturally (eating the bait) and by oral administration [through spraying it] in the mouth.

“The first analyses by the veterinary school yielded positive results [when] measurable antibodies were picked up in a ruminant after oral vaccination,” he explained.

This made the bait studies critically important, because if kudus ingested the vaccine orally by means of bait under natural conditions, they needed to ingest sufficient quantities. Bait was then hung in strategic positions in trees on a farm, so that this method could be tested in a natural environment.

“Factors such as strong wind as well and rain impacted the bait, but all in all it was very successful, and the distribution system was effective in attracting kudus in a natural environment. However, more targeted studies are needed to determine if an acceptable vaccination coverage can be achieved,” Hassell said.

Farmer’s Weekly previously reported that rabies had been exclusively maintained in the Namibian kudu population due to the fact that the rabies virus had undergone “fine genetic changes”.

The first epidemic started in 1977 and lasted for nine years, with the second largest outbreak following in 2001. 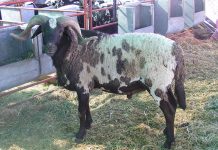