It is estimated that billions of dollars worth of food is going to waste in the US as farmers are faced with massive surpluses in production due to disruptions to the supply chain.

According to a National Sustainable Agriculture Coalition report, the impact of food losses from March to May alone could amount to US$1,32 billion (about R24 billion).

Data from the US Department of Agriculture (USDA) has also shown that in the livestock sector, an estimated 283 000 pigs had been slaughtered, a decline of about 43%, since many slaughterhouses shut their doors due to restrictions to contain the spread of the coronavirus disease (COVID-19).

About 76 000 cattle had been slaughtered during the same period, representing a 38% decline.

Millions of pigs, chickens and cattle had already been euthanised because of slaughterhouse closures, limiting supplies at retail supermarket chains, John Tyson, chairperson of one of that country’s largest meat suppliers, Tyson Foods told local media.

In addition, dairy producers in Wisconsin, Vermont and other states had been forced to dump excess milk en masse, due to severely diminished demand.

Commenting on the situation at a White House news conference, Agriculture Secretary Sonny Perdue said: “[US] agriculture has been hard-hit, like most of [the US], with [COVID-19.”

He said farmers and ranchers were facing extreme difficulties in trying to get their produce to markets because of supply chain and demand disruptions.

“Having to dump milk or plough-under vegetables ready for market, is not only financially distressing, but it’s heart-breaking as well for those who produce them,” Perdue said.

In response, the US government recently announced a US$19 billion (R346 billion) relief programme to help farmers during the COVID-19 crisis.

The USDA also said in a statement it would make monthly purchases of US$100 million (R1,8 billion) each of fresh produce, dairy products and meat products from embattled farmers. 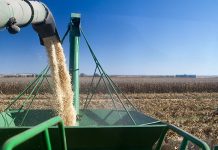