Any viable tilapia grow-out system is dependent on adequate oxygen levels. As stocking rates and fish size increase, so too does demand for oxygen, and it is important to ensure adequate supply at all times.

Following on the previous article, which dealt with coping with excessive heat in recirculating systems, comes the question of oxygen content and how it limits stocking rates.

All fish need oxygen in the water to survive, even species such as Clarias catfish (our indigenous sharp-tooth catfish), which have an ancillary respiratory organ in the skull cavity. Fish such as these and some of the Anabantid family (climbing perch, gouramis and our African Ctenopoma species) can live in almost deoxygenated water. In comparison, riverine fish such as trout or tigerfish require highly oxygenated water to survive, demanding a minimum oxygen content of 6mg/l to 7mg/l.

Tilapia are still-water fish. Such water bodies, if shallow, may become extremely warm during the summer months (28°C to 32°C) and may experience periods of low oxygen content. Also, the water’s ability to hold oxygen decreases with altitude.
Water rich in phytoplankton (algae) is also usually rich in zooplankton (microscopic aquatic animals such as daphnia).

During the day, oxygen is released as a result of photosynthesis, with saturation levels sometimes being attained. The converse is true at night, and the early morning hours may have oxygen levels as low as 1mg/l to 2mg/l, which is stressful for fish.

Surface waters are the most oxygenated areas of any water body, as oxygen transfer takes place there. Tilapia have the ability to ‘mouth’ the surface to utilise this most oxygen-rich water. Although this does help in times of oxygen scarcity, it is not a desirable situation. Fish that are oxygen-stressed simply will not grow. As stocking rates rise, oxygen demand rapidly increases, and the risk of losing an entire tankful of fish is high.

Stocking rates
In recirculating systems there is a need to utilise the limited tank space to the maximum for economic viability.
I have often heard people boast of stocking rates of 40kg/ m3 of 50kg/ m3 of water. At this level it is extremely difficult to maintain safe oxygen levels (above 5mg/l) without sophisticated equipment.

Simple blowers are often inadequate, whether diffusing air through air-stones or diffuser piping. Other methods such as venturis on water delivery pipes can help, but at near-harvest time when fish are large, concentrated in number and fed high volumes of feed, severe oxygen starvation can and does occur.

Systems and solutions
It is tempting to say that one should reduce stocking levels to safer levels of 15kg/ m3 to 20kg/ m3, but this may not be viable in terms of space utilisation.

Alternative solutions include using pure oxygen, but this raises the question of cost, for both equipment and running costs. Although widely available, bottled oxygen is charged at a fixed monthly rental rate. There are also oxygen machines on the market, but their rated output must be in proportion to the needs of the system as a whole. Devices such as oxygen cones have potential, and can sometimes be home-made with success.

Whatever means is used, adequate oxygen levels are essential for the commercial viability of a tilapia grow-out system, and more research into practical and affordable methods is needed. 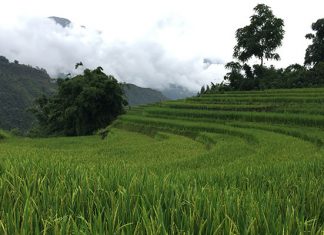 April 8, 2020
Countries rallying to ensure local food supply are restricting exports amid uncertainty over how long the coronavirus disease (COVID-19) global pandemic will last and continue to affect trade.