Farmers’ sons arguably become more involved in their fathers’ careers than do any other children, which helps to explain why so many take up farming themselves. This is certainly the case in the Rapholo family. Matome Rapholo, a former teacher from Senwabarwana (Bochum), about 70km from Polokwane, has always had a passion for farming. In 1992 he bought 20 Pedi sheep ewes to start a part-time sheep farming operation on communal land.

He later bought five Damara sheep rams from a commercial breeder in Swartwater, not far from Senwabarwana, to cross with the Pedi ewes. Keen to involve his sons Anaias and Mphai on the farm, Matome had them help out with various activities, even accompanying him on his visits to the local co-operative to buy livestock medication. Today, Ananias admits that working alongside their father from an early age, he and Mphai inevitably developed a keen interest in farming.

After Ananias completed his matric, he obtained a diploma in animal production at Potchefstroom Agricultural College. His brother Mphai studied a B Tech in animal health at the Tshwane University of Technology. Their academic studies behind them, the brothers gained valuable work experience: Ananais spent a year doing in-service training on a farm near Potchefstroom, while Mphai worked for two years in the veterinary section of Idexx Laboratories. Finally, in 2003, they returned home and with Matome, launched the Mohloma Agricultural Co-operative. Among its members are Matome’s wife Ditjie and Ananias’s wife Baatseba, who also has a diploma in agriculture. After approaching the local authority at the village of Uitkyk near Senwabarwana, the co-operative was given permission to operate on 15ha of communal land.

Changing to Dorpers
Matome’s early decision to cross his Damara and Pedi sheep had had good results – the Damara provides high resistance to sickness while the Pedi ensures hardiness. The family now wanted to do even better, however. “We were looking for a sheep that would do well in our area and give us more meat,” says Mphai. “So we chose the Dorper. The breed has many other advantages. It’s very fertile, has good mothering ability and grows rapidly, even under extreme conditions.

Ananias agrees, adding that Dorpers are particularly tame and easy to work with. The co-operative bought its first three Dorper rams in 2005 to cross with the Damara and Pedi ewes, and were soon pleased with the results. “The Dorpers have done extremely well on the veld, and their mortality rate is low,“ says Mphai. He adds that the breed produces a high quality carcass regardless of grazing conditions. This makes it easier for the co-operative to make a profit. Ananias works only part-time on the family farm. He is employed full-time as a livestock manager at Schulenburg Boerdery in Dendron.

“We do supplement with protein licks in winter, though,” he says. There is no specific breeding season as land is a major problem. “We don’t have the luxury of separate camps,” Mphai explains. Currently the co-operative runs 60 pure-bred Dorpers and about 180 Dorper F2 sheep, and is a member of the Bosveld Dorper Club.

Extension services
Soon after setting up their business, Ananais and Mphai realised that there was a desperate need in the area for an extension service. The enterprising pair decided to put their experience and qualifications to good use, and formed the Blouberg Co-operative, which offers advice to farmers in more than 10 villages around Bochum. The brothers also do call-outs to perform vaccinations, or to assist where a cow or sheep is having difficulty calving or lambing.

Mphai says that because some clients are far away, they sometimes have to give advice over the phone. The co-operative has also set up a medicine store, which has proved popular among local farmers. The brothers are particularly strict about animal health within their flock. “Healthy animals bring in more profit, so we follow a strict management programme,” says Ananais.

They vaccinate to control various internal and external parasites and dip regularly for ticks. In summer, because it rains often, they use pour-on dips at least every fortnight. During winter, however, they dip only once in three months. Mphai explains that as they have become more familiar with the diseases in the area, so it has become easier to control them. The most prevalent threats are heartwater, pulpy kidney disease and wireworm, the first two of which have to be prevented through vaccination.

Marketing the sheep
Most of the co-operative’s mutton and lamb are sold to the local community. “We’re not far from the township and other villages, so most people come here when they need a sheep,” Mphai explains. “They’re popular for weddings or cultural rituals.” The co-operative also sells rams to people wishing to establish their own flocks, and holds auctions for small-scale farmers. Twice a year, the family sells a number of sheep to Pieter Schulenburg of Leeuwfontein farm in Dendron, who runs a small sheep feedlot and an abattoir. Mphai Rapholo studied for a B Tech in animal health at the Tshwane University of Technology.

The brothers believe strongly in the value of networking. They sell a few of their pure-bred animals through the Bosveld Dorper Club’s auctions each year and participate in as many agricultural shows and competitions, including the Pretoria Show, as possible. All this helps to increase profits as well as build their reputation. And it’s also an excellent way to learn about breeding standards – and how to improve their own. According to Mphai, the weaned lambs are marketed at six months for the feedlot, at which stage they weigh approximately 60kg.

Challenges and future plans
As with many small-scale operations, the Mohloma Agricultural Co-operative faces numerous challenges, land being the toughest of all. According to Ananias, it’s difficult to farm efficiently on communal land as neither the animals nor the veld can be managed optimally. “Another problem is theft – we lose a few animals to poachers,” he says. However, they are adamant that these hardships will not limit them, and are determined to build the family business into something they can leave as a legacy for their children.

In the meantime, their short-term goals are to start a mini sheep feedlot to add value to their weaners. “We can increase income by adding value to our products,” says Mphai. “We also intend building up our pure Dorper flock to at least 100 breeding ewes within the next year or two. “Mohloma Agricultural Co-operative has more ambitious plans, however. Building on their solid foundation, they intend to increase both quality and quantity. “The next step,” insists Mphai proudly, “is to have a registered stud.” 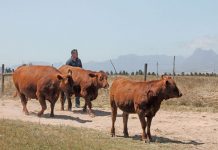 Turning a hobby into an award-winning Angus stud