Cabbages are popular with South African consumers and can provide growers with sustainable short-term income. However, sound management is needed for keeping cabbages clear of pests and diseases. 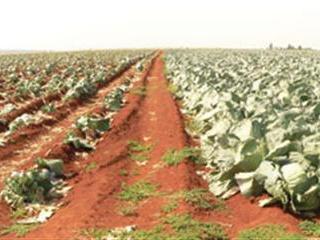 Health websites praise cabbage as a food that’s low in calories, fat and cholesterol, yet high in vitamins and minerals. It’s also relatively cheap, can be used to create a variety of dishes, and stores well. In South Africa, where so many households have low incomes, cabbage is a logical choice. All these advantages mean that growing cabbages commercially can be rewarding, and income can also be generated every 90 to 120 days.The downside is keeping cabbages clear of pests and diseases, so best management practices are demanded.

READ: Why cabbage should be your first choice

The challenges of keeping cabbages clear of pests and diseases

Joe Culverwell has been running a mixed farming operation – trading as JSG Investments – on his 1 560ha Broadacres farm near Bergville in KwaZulu-Natal for 15 years. One of his cropping enterprises is cabbages, and he has developed a comprehensive programme of keeping cabbages clear of pests and diseases that has helped to ensure his success.

Many customers
Joe sells to a range of buyers, from hawkers to retailers. His main market is for large, loose cabbage heads selected visually by his harvesters, while his secondary market is for smaller cabbage heads sold in loom bags, with each holding 8 to 10 cabbages and weighing 25kg to 30kg. These are popular among hawkers in the former Qwa-Qwa area. Most customers collect their cabbages from the farm, but deliveries are sometimes made on request. Joe holding an undersized cabbage head; the ideal-sized head is at his feet is about to be harvested.

Joe has two to three cabbage seasons a year, and at any one time has 8ha to 10ha of the crop growing in 2ha blocks. Although the seasons vary, the pattern typically involves planting from mid-July to the beginning of September, and harvesting from the end of October until the end of November. Because this is over winter, the plant-to-harvest period is about 120 days.

Pest and diseases
“The treatments against pests and diseases for my cabbages, and to a lesser extent my cabbage nutrition programme, are influenced by the season,” Joe explains. “Aphids are common in summer and autumn, and bollworms are a problem mainly during summer.

Now and again I also experience white grub attacks.” Being sap-suckers, aphids tend to colonise cabbage head leaves in large numbers if left uncontrolled. According to Joe, they initially suck on the outer leaves, leaving them crinkled.

A cabbage’s outer leaves are vital to good head development, so it’s important to prevent aphids from removing the nutrients in these leaves. Once the outer leaves have been sucked dry, the aphid attack progresses towards the centre of the cabbage head, continually damaging the plant’s health and development.

Another reason for early treatment in keeping cabbages clear of pests and diseases is that the tightly packed inner leaves of the cabbage make it increasingly difficult for pesticides to reach the aphids. Joe points out that aphids are not only a problem in themselves. “As well as damaging cabbages directly, uncontrolled aphid attacks can also weaken the plants so much that they get diseases such as black rot and bottom rot, as well as loose heads. You can end up with unsellable cabbages because the heads are either stunted or visually unattractive to consumers,” he says.

According to Joe, the greatest bollworm damage occurs when the worms, which are the larvae of moths, begin eating the crown of a young cabbage plant. The crown should grow into a single large head, but if it is damaged by bollworms, it will usually form numerous head shoots that look like Brussels sprouts when fully developed. Even if a single head does develop after the crown is eaten by bollworms, it will be stunted and unsellable.

While white grubs have not proved a signficant threat to Joe’s cabbages, the pest virtually destroyed one of his potato crops. White grubs mainly attack the roots up to the seedling plug, even damaging the stem just below the soil surface. Plants attacked by white grubs thereafter have no means of absorbing soil nutrients and moisture.

According to Joe, the pests are particularly difficult to control because they live underground. As they have not proved a major threat to his cabbages, however, he has not instituted a permanent white grub control programme.

Preventative controls for keeping cabbage clear of pests and diseases
Five to 10 days before planting his cabbages, Joe targets morning glory weeds and annual grasses with 1,5l/ ha of Sultan mixed with 2l/ha of Galigan or 1l/ha of Goal. At the same time, he applies 200ml/ha of Lambda pesticide aimed mainly at cutworms in the soil.

For these applications, he uses a 600l capacity, 14m-wide Jacto three-point linkage boom-sprayer.

Joe is careful not to damage the plants. “The Galigan and Goal have a long residual effect on the soil surface, so if newly planted cabbage seedlings experience moisture stress and their leaves wilt and touch the soil, they’ll absorb the pesticides and their growth will be set back severely,” he explains. “To minimise the risk of wilting, I use strategic irrigation to ensure that a maximum of 15ml of water goes into the soil immediately pre-planting and another 15ml is applied straight after planting.”

While Joe prefers this method, he does resort to what he describes as a less effective spray action if there are time constraints: 1l/ ha of Metagan Gold herbicide and 200ml/ha of Lambda straight after planting, immediately followed by 15mm of irrigation. He has found this method less effective, as Metagan Gold is mainly a grass killer, while the Sultan with Galigan/Goal application targets a diverse range of grasses and broadleaf weeds.

The rest of the year
In spring, summer and autumn, when the threat of aphid and bollworm is highest, Joe starts preventative pesticide spraying no more than 21 days after planting and at intervals of no more than 10 days.

These applications typically consist of the following mixture:  100ml/ha of the water pH corrector Bladbuff; 500ml/ha to 700ml/ha, depending on cabbage age, of the pesticide Cyperfos; 90g/ha of the sodium molybdate liquid fertiliser SoMo; and 300g/ha of the water soluble form of boron, Spraybor. The unmistakable signs of black rot. To minimise the effect of fungal diseases such as these, Joe uses copper-based fungicides.

Joe chooses the foliar feeds SoMo and Spraybor because Broadacre’s soils are particularly low in boron. He points out that he does not spray his cabbages with Cyperfos within 14 days of harvesting due to the withdrawal period requirements of this chemical.

“Sometimes, at about 45 days post-planting, I’ll spray my cabbages with 5l/ ha of Fertiflo, a liquid fertiliser of nitrogen (N), phosphorus (P) and potassium (K),” he says.

“This is in combination with my application of Cyperfos and the other products. I’ll apply the Fertiflo if I see a lag in cabbage growth or if there’s discolouration of the leaf tips due to potassium deficiencies. These symptoms are more common during cold snaps when cabbages struggle to access soil potassium. I might even apply a second Fertiflo spray, usually at about 60 days post-planting.”

To avoid overuse of Cyperfos, Joe sometimes replaces it with a mixture of the pesticides Trichlorfon (600ml/ha) and Methomex (250g/ha). However, he will use no more than two sprays of this mixture in a season. According to him, this Trichlorfon/Methomex mixture is particularly effective against aphids. He uses similar spray programmes for his cabbages over winter, but at intervals of 15 to 20 days.

Joe sprays fungicides only when they are needed – usually soon after the cabbages have been damaged by hail. “Cabbages have a waxy coating on their leaves that helps prevent diseases from entering the plants.

But hail can damage this coating,” he explains. “If there’s a threat of fungal disease I’ll put down at least three sprays of a copper-based product, like Kung Fu, at 1,5l/ha.”

Joe points out that he is willing to modify any of these spray programmes when necessary on the advice of his chemical rep, Rijk Neethling, from Nulandis in Winterton.

Fertiliser application
When planting seedlings, Joe places 750kg/ha of 2:3:4 fertiliser in bands 20cm to 25cm deep, using a modified Howard ridger: the ridging wings have been removed and a fertiliser chute placed behind the ripper tine.

Joe explains that the deep fertilising removes the risk of the cabbage roots being burned by the fertiliser, while the deep ripping prevents J-rooting of the primary root of each seedling plug during planting.

A week after planting, the cabbages get the first of three weekly hand-applied top-dressings of urea. The cabbages are planted with a 76cm inter-row spacing and a 50cm intra-row spacing. The three top-dressings come to 375kg/ha of urea, which equates to 172,5kg/ha of nitrogen.

The future: cash-flow and competitors
While satisfied with the quality of his cabbages, Joe says that his biggest challenge is marketing his cabbages and having to deal with robust competition in the “fickle cabbage market”.

“One moment you can be making good money from your cabbages and all of a sudden prices can plummet because of an unexpected glut,” he explains.

“So I feel it’s important to build up a consistent market base and maintain a good relationship with my buyers. “But I’m prepared to take the good with the bad because my cabbages help me to maintain my farming operation’s cash flow while my longer-term crops are still in the ground.”

This article was originally published in the 05 October 2012 issue of Farmers Weekly.