Home » Crops » Vegetables » Beware those aphids in your cabbage crop

The recent announcement that aphids and not leaf hoppers are the vector for the spread of the brassica stunting disorder virus (BSD) makes sense. 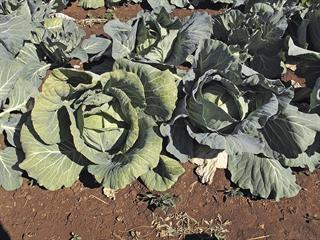 You rarely see leaf hoppers in cabbage lands, whereas aphids are a major pest of brassicas, especially during the cooler months.

It creates white patches where it feeds and causes the leaves to curl over the colony, thus protecting it. The aphids have a distinct light-grey wax body covering.

L. pseudobrassicae is greener and spreads over all the leaves without causing the curling, but still stunting growth considerably. It is more of a threat during the hot months.

Whereas in the past, farmers would not be too alarmed by the presence of a few aphids in the land, they now have to adopt a no-tolerance approach.

BSD has meant that some farms are no longer able to grow cabbages, so all possible control measures should be taken.
This starts with the seedlings.

When these are newly transplanted, winged aphids enter under the leaves of the growing tip and are not readily noticed unless you specifically look for them. As more new leaves form, the developing colonies are further protected, making control even more of a challenge.

If BSD is prevalent in the area, apply a drench of the systemic insecticide imidacloprid before planting (remembering to follow the instructions on the label).

This will afford protection for some time, reduce thrip damage and make it much easier to control subsequent invasions, as you will no longer have aphids hidden in the plants’ hard-to-get-at areas.

New cabbage aphid infestations also tend to feed on tender developing leaves and are not effectively controlled by a pass with the boom sprayer, even with a systemic product.

Instead, about five to six weeks after transplanting, use a knapsack sprayer and direct the spray to the middle of the cabbage plant only.

A knapsack might seem a primitive way to go about it, but it’s highly effective and economical. You can spray one plant per second (this includes the time taken to refill the tank).

Note that it is actually faster to do only one row at a time and not cross over to the next row as well, a natural inclination. It takes one worker 12 hours to spray 1ha (45 000 plants). The amount of insecticide used is minimal because it is applied only to a small percentage of the total land (the middle of each plant).

A knapsack sprayer does not necessarily replace the boom sprayer, which will take care of the aphids on the exposed areas.

Mechanical removal of diseased plants
A second measure is to have a trained person walk through the land with a hoe and chop out any plant showing symptoms of BSD. This can be done at two-week intervals and further reduce the risk of the disease spreading. By effective aphid control, you can reduce the spread of BSD considerably.