This is a locally developed medium-to large-framed sheep, with both rams and ewes polled.

In 1906, Senator JC van Rooy of Koppieskraal Farm in the Bethulie district of the Free State started experiments to breed sheep for slaughter lamb production.

The breed had to be strong and hardy to cope with regular droughts;

With these aims in mind, Van Rooy made use of a white Blinkhaar Afrikaner ram and 80 Rambouillet Merino ewes.

With the progeny of these, he applied the principle of inbreeding, coupled with severe selection.

The latter was aimed mainly at size, conformation and white sheep with enough wool in between the bristly hair to offer protection from cold.

With the introduction of a polled Wensleydale ram, Van Rooy managed to get good conformation with as little fat localisation on the body as possible and only reasonable accumulation on the rump.

The sheep soon adapted to the climate of the south and south-western Free State and the north-eastern districts of what was then the Cape Province, and farmers increasingly used Van Rooy rams.

Today, the breed is once more gaining popularity in South Africa, thanks to successes achieved with carcass conformation by the Van Rooy Sheep Breeders’ Society.

The milk production of the Van Rooy ewe, coupled with its ability to use natural grazing in adverse conditions, ensures maximum production in drier areas.

The present-day Van Rooy sheep is still run mostly in arid areas where survival and reproduction on natural grazing are essential for the economic production of meat.

Van Rooy ewes can be mated throughout the year and are ideally suited for accelerated lambing systems.

Some farmers also take advantage of the hardiness of the Van Rooy ewe to crossbreed with Dorpers, White Dorpers, Dohne Merinos and others to produce a heavier slaughter lamb.

The Van Rooy is a medium- to large-framed sheep, and both rams and ewes are polled. The tail is characteristically fat-rumped. It has a dewlap from the jaw to the brisket and a very prominent chest and brisket.

The upper part of the body must have a woolly mixture of hair. On the head, legs and lower parts of the body, the hair should be short and devoid of wool.

The tail consists of two parts: the main upper part and the switch. The main portion should be broad and firm, and affixed as high as possible. It is oval in section towards the rear, with a slight upward tilt at the end from which the switch hangs down vertically.

The switch should be smooth with short hair and no wool. The size of the tail should be in proportion with the rest of the sheep.

When it comes to meat, a sheep should have as little fat localisation on the carcass as possible, except on the rump and in the tail. The skin, meanwhile, makes good glove leather.

Van Rooy rams are widely used to produce crossbred lambs, which put fat on the carcass at a much earlier stage than when crossbreeding two non-fat-tailed breeds. 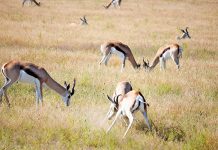