Home Opinion By Invitation A return to normality beckons

Dr Roelof Botha, economic advisor to the Optimum Investment Group, explains the factors that leads him to believe that 2021 may be a return to greater normality.

No event in modern history has created as much disruption to the global economy as the COVID-19 pandemic. Fortunately, the tireless efforts by leading microbiologists around the globe have resulted in the development of several vaccines for the virus and the New Year has welcomed the roll-out of mass vaccinations.

As at the end of February, a total of 200 million doses had been administered to people in more than 100 countries. Emerging market currencies immediately felt the positive impact of a pronounced return to a risk-on sentiment, with global fund managers pouring funds into higher-yielding bonds and equities.

The prospect of large-scale vaccination gaining traction has brought the reality to bear of an inevitable return to a large degree of normality during the course of 2021.

Although further economic recovery is likely to be sluggish during the first two quarters of 2021, a variety of growth drivers have come to the fore that suggest a meaningful revival of economic activity is imminent.

A key driver of higher economic growth in 2021 will be the lowering of the cost of capital (and of credit) by 30%, as measured by the prime overdraft rate, which is at its lowest level in 50 years.

Fortunately, inflationary pressures have all but disappeared in the wake of subdued demand and the recovery of the rand exchange rate, which should prevent the hawkish Monetary Policy Committee of the Reserve Bank from raising the repo rate during 2021. 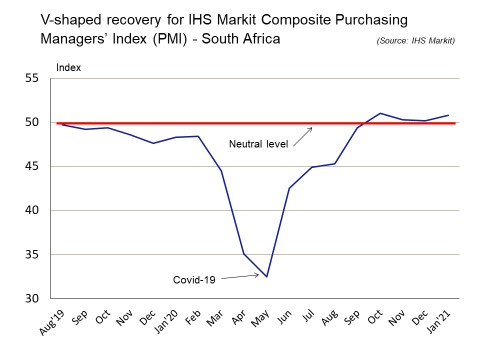 For South Africa, the composite PMI increased to 50,8 in January 2021 from 50,2 in December 2020, pointing to a continuation of growth in private sector activity, with output reaching its sharpest pace of growth in over four years.

This index has been above the neutral 50-mark level, which signals the border between economic expansion and economic contraction, for four successive months. The index is based on quantifiable data from purchasing managers, including sales orders.

The main reason for the all-time record trade surplus in 2020 is the sterling performance of primary sector exports.

Surplus food production and higher commodity prices have led to consistently higher exports during 2020, while imports were subdued as a result of low demand and the weakness of the rand between April and October.

South Africa is bound to continue benefitting from a resurgence of the commodity price cycle. 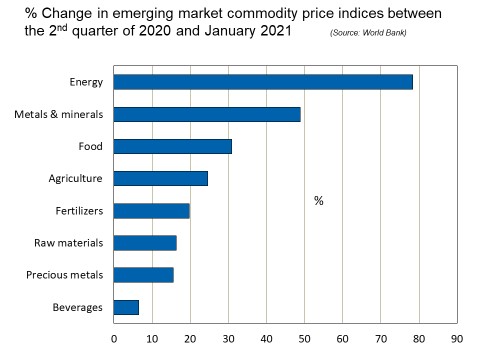 Closer scrutiny of the third-quarter GDP data reveals good news for shareholders of JSE-listed equities, namely a resounding improvement in the economy’s gross operating surplus (GOS). Between the second and third quarters, the ratio of GOS to GDP for the economy as a whole increased from 43,7% to 47,6%, its highest level in 18 quarters.

The quarter-on-quarter increase in GOS amounts to R112 billion, which suggests that many companies that had deferred dividend payments to conserve cash and to retain as many staff as possible due to the pandemic, should be in a position to resume dividend payments in 2021.

A total of 50 strategic infrastructure projects and 12 special projects worth R340 billion with the potential to create 290 000 jobs have been gazetted by the Minister for Public Works and Infrastructure and are on the verge of being implemented.

A new sense of urgency in lifting the economy’s growth rate has become evident under the presidency of Cyril Ramaphosa and is reflected in the recent establishment of a Technical Advisory Panel for South Africa’s Infrastructure Investment Plan. 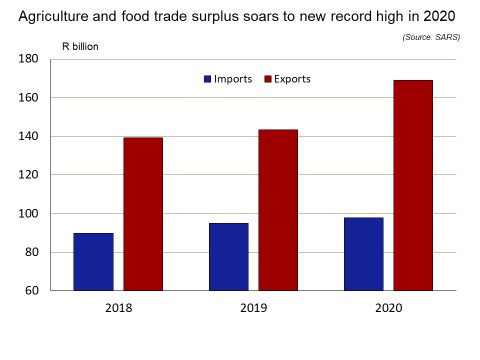 Recovery of the rand

Since November, emerging market (EM) currencies have taken revenge for the beating they took during most of 2020. The South African rand has been at the forefront of the pack of recovering EM currencies, posting an impressive 30% gain against the US dollar between 6 April and 31 December.

During most of February, the rand was trading at the same levels as at the end of 2015 and could maintain a rate of around R15 to the US dollar well into 2021, albeit likely to remain volatile. A measure of currency strength will assist efforts to contain inflation and prevent interest rates from increasing again any time soon.

At the end of February, the seven-day average for new reported cases of COVID-19 infections had dropped to its lowest level since early November 2020, creating hope that South Africa can be spared a third wave of infections, especially due to the commencement of mass inoculations.

An inevitable return to a large degree of normality, combined with the emergence of an impressive number of growth drivers and the development of new digital business applications, suggest that 2021 will be filled with opportunity, further economic recovery and a significant increase in employment.