Dairy farmers in Botswana are calling for the introduction of a tax on milk imports. This follows concerns that some dairy processing companies preferred to import raw milk from neighbouring countries rather than buy locally produced milk.

According to figures released by Botswana’s Department of Agriculture, dairy processing companies imported 94% of their raw milk requirements, while local farmers supplied only 6%.

READ MORE: 5 Cattle diseases that can kill your business

In a recent interview with Farmer’s Weekly, Botswana-based dairy farmer, Johan Schutte, said that dairy farmers in Botswana hoped to supply processing companies with 60% of their raw milk requirements within the next five years. However, this could be achieved only if government introduced a milk import levy to protect local producers.

“The perception that Botswana’s dairy farmers can’t meet the demand for milk is wrong,” he said.

According to the Botswana Dairy Farmers’ Association, feed costs had increased by more than 50% during 2015/2016, leading to an increase in the price of locally produced raw milk. 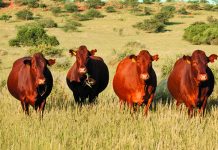