While the South African government and the country’s white farming sector are still finding mutually acceptable ways to implement land reform, a small agri-village in the Winterton area of KwaZulu-Natal became a trendsetter decades ago.

The 1980s were the beginning of the end for apartheid in South Africa. The government of the time was unable to stop the rapidly rising tide of national and international opposition to its discriminatory policies against its black citizens.

At the same time, some forward-thinking white farmers realised that the patently unfair apartheid government-led practices of disinheriting non-white South Africans of their land needed to be remedied.

READ:Emerging farmers must be empowered

In 1986 Peter Stockil and his brother Mark, who farmed, and still farm, on Glenside Farm in KwaZulu-Natal’s Winterton area, began investigating how they could contribute towards uplifting their black farm workers.

All were living in typical farm worker accommodation on Glenside Farm and did not have any land to call their own.

“The Apartheid government had the Development Aid Laws Act 126 of 1986 that made a provision for a R15 000 grant per person to buy land,” Peter explains. ”Mark and I identified 38 of our farm workers who we wanted to apply for this grant. Our family has owned and farmed on Glenside Farm since 1878. We had loyal families of farm workers, some who had worked for us for generations, and we wanted to try to assist them to get their own land.”

Obtaining grants
It was a tedious process but Peter, Mark and the 38 Glenside farm workers were eventually successful in obtaining the grants. A total of R9 000 from each R15 000 grant was pooled into the Isibonelo Community Land Trust (ICLT), registered in 1998, and used to buy 120ha of land about 1km away from the town of Winterton.

The remaining R6 000 was kept by each beneficiary to be used to construct a house and to set up water reticulation on the 50m x 50m plot that each received to live on. The remainder would be used to grow crops and graze livestock. The Stockils gave this concept a name: agri-village.

Peter explains that the ICLT members wanted to be near Winterton instead of on Glenside Farm, which is about 9km away. Being near town meant easy walking access to schools, the local health clinic and shops, among others. Residents of the agri-village who still work on Glenside Farm are transported to and from work by Peter and Mark.

“The communal grazing and cropping areas of the remaining 120ha of the agri-village are owned by the trust, and the members benefit from these areas by producing livestock and crops for income,” Peter explains.

Code of conduct
To ensure that all residents of the agri-village lived comfortably together, they developed and agreed to a trust deed, assisted by Peter and Mark. It was signed by the 38 beneficiaries and bound them to a code of conduct.

The code of conduct also established an elected committee of seven trusted individuals, including Peter and Mark as per the beneficiaries’ request, who would oversee the trust’s finances and agri-village’s development. In addition, a committee of six to seven younger individuals was also elected to be responsible for attending to the agri-village’s day-to-day issues, such as general maintenance of the trust’s infrastructure.

Farming commercial crops communally
It was understood that, as time went by, the original ICLT members working on Glenside Farm would eventually leave the farm’s employ, due mostly to reaching retirement age. To provide these members with additional income, it was agreed that all would begin growing commercial crops on the 55ha of dryland arable land that the group collectively owns.

To kick-start this commercial cropping business, in 2010 Peter and Mark were able to secure a R422 000 grant from the KZN Department of Economic Development. This was used to hire contractors to plant and harvest crops, and buy necessary inputs. Two more boreholes were sunk to provide the residents with additional sources of water for their personal needs.

While mostly unfavourable summer weather has severely compromised much of ICLT’s crop production over the past five years, with Peter’s and Mark’s mentoring, and with the contracted financial management of the KZN Agricultural Union, the ICLT’s cropping operation has been able to maintain a positive bank balance. Part of the income from its soya and sorghum crops has been retained for the production of the next season’s crops, and all profits have been shared equally.

“This profit-sharing has ranged from R1 000 down to R500, together with a 50kg bag of maize meal per month per trust member,” says Peter.

According to beneficiary Ben Marwa, who is now retired from Glenside Farm, he and his fellow ICLT members understand that crop production and associated income will vary from year-to-year. Regular meetings are held to keep members updated on how their money is being used, and what positive or negative impacts their crops are experiencing.

“I would tell workers on other farms that the idea of our own agri-village is a very good one,” says Ben. “You get to own land, and you can do what you want with it. You can even sell it to an outsider as long as this sale is approved by the other members of the trust, and the buyer signs a document saying that they will follow the Trust’s rules.”

He says that, with appropriate skills transfer to the youth of the agri-village, he looks forward to the day when these youngsters can run the trust’s agricultural business by themselves.

Peter says that he and Mark are intent on developing the trust’s cropping business to a point where members can each get a R2 000 monthly income plus and a 50kg bag of maize meal.

“I would like the government to help this trust with funding to establish centre-pivot irrigation for about 30ha of croplands. I would also like government to give tax concessions to trusts such as these because they still have to pay 14% VAT on their production inputs, which then undermines profitability,” Peter says.

This article was originally published in the 1 January 2016 issue of Farmer’s Weekly. 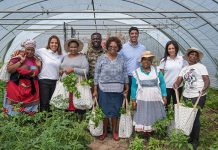