Hard work, dedication and showing a lively interest in agriculture have propelled Iris Mashaba and Dineo Mokhabuki from being temporary farmworkers to holding managerial positions at major agribusinesses near Mbombela in Mpumalanga.

Twycross Farm and Packers, a family business nearly 100 years old near Mbombela in Mpumalanga, has provided a path for many of its workers to rise through the ranks and become senior managers.

Owner, Simon Dunshea, a fourth-generation member of the operation, has learnt that while it is easier to find someone with experience and poach them from elsewhere, the ideal candidate is often already in one’s team.

READ Mentorship – the good, the bad and the ugly

“Sometimes, the right people are under your nose. It’s important to speak to the people you work with and find out what their background is. If you give them the opportunity and nurture them, the abilities that emerge can be amazing.

“Promoting from within is also important because these people understand your business better as they have come from the ground up. Socially, too, it’s important to develop your own people.”

Road to management
Iris Mashaba started working at Twycross Packers in 2003 as a temporary employee, assisting the then packhouse manager, Julian Marshall, with administration and stocktaking. She had struggled to find employment after school and did not have the finances to study further. This was her first job.

“I started here from zero. I didn’t know anything about farming or packhouses, but I paid careful attention when Julian spoke to me. After the first season they made my position permanent because they could see I worked hard.

“Julian started showing me how the packing line works, how to test for minimum residue levels on the fruit and how to do the consignments. Gradually, I learnt everything about running the packhouse.”

In 2010, Mashaba was appointed assistant packhouse manager, and earlier this year took over as packhouse manager from Marshall, who retired in March. She is responsible for one million 4kg- trays of avocados in a season, which equates to 5% of South Africa’s harvest.

About 80% of the company’s produce is exported to Europe.

Dineo Mokhabuki has also turned her life around through the mentorship and opportunities she received at Twycross. In 2003 she was working as a waitress in a restaurant close to the farm, trying to make enough money to pay for an electrical engineering degree.

Twycross’ farm manager at the time, André Loubser, who frequented the restaurant, decided to give Mokhabuki a chance at a better job to pay for her studies.

“I started out as a farm clerk, assisting with GlobalGAP [good agricultural practices] accreditation and record-keeping,” she recalls. “After three years, I was promoted to assistant farm manager, working side by side with André. He encouraged me every step of the way, and the more interest I showed in the farming operations, the more time he took to teach me everything he could.”

Mokhabuki was promoted to farm manager in 2009, soon after Loubser retired. Her experience stood her in good stead; earlier this year, she joined HL Halls & Sons in Mbombela as a section farm manager.

Mashaba explains that her greatest challenge in going from general worker to manager was learning how to deal with staff.

“I’ve had to make an effort to understand how to get the best out of them. When dealing with them, I’ve learnt to focus on the job and not make it personal.

I have to explain things on their level as some of the people are not educated and as a result they have a sense of inferiority. To get past that, I speak to them as if I were one of them. If they don’t understand what’s expected of them on the packhouse floor, then the room for error in getting the consignments right is greater.”

Dunshea says this is one of the reasons Mashaba is such an asset to the company.

“One of her greatest strengths is making sure everyone has a full understanding of what needs to be done. She can identify where they are and work out a system to get them to where they need to be. She’s very fair and firm, and the people who work under her are highly productive, purely because of the way she manages them.”

He says that as a result, the packhouse runs optimally, enabling Twycross to maximise the volume of exportable fruit. The result is more income for the growers, and more growers delivering to Twycross.

According to Mokhabuki, her greatest challenge was being a young, black woman in a position of authority, when most of the workers were men who did not want to take instructions from a woman.

“In the beginning, bad things were said and threats were made. I didn’t know how to react to that. But I said to them, ‘I’ve been given the task to manage you.

If you don’t want me to lead you, then who must lead you?’ I told them that I was not there to trample on anybody, but to build a harmonious, happy working environment. After that, everyone started warming up and I started gaining their trust. They saw me as one of them.”

Mokhabuki says the experience helped to shape her as it taught her humility and respect.

“I had days when I broke down, but in the end I decided to make the best of it and move forward. My father taught me to be resilient.”

She stresses that failure is part of life but it is important to keep going.

“Every time I failed in something, I asked myself where I went wrong. Then I worked hard at tackling those issues. If I fail I don’t stay down. I’m going forward, not backward,” she says.

Getting to a top spot
Both Mokhabuki and Mashaba believe that showing a keenness for the job and not being afraid of hard work are what brought about their success.

“Getting yourself noticed is about having a passion for something and showing it. You must put your heart in it, work hard and show interest,” says Mokhabuki.

Mashaba adds that if you have enough interest in something, no one needs to push you to go further and succeed.

“I’ve always had an interest in agriculture, but my only exposure had been on a basic level, as my parents were farmworkers. Farming is close to my heart so it doesn’t take effort to try harder. “I’m not just working because I need the income; I have a passion for this, I can feel it in my heart.

“In the packing season there’s no time for sleep. You need to be passionate about what you do.”

Marshall says it is important from a company perspective to identify people who have passion, and develop their skills.

“If someone is going to share management responsibilities with you, they must be able to carry out the tasks that are delegated to them. The more they take on, the more you give them. And if you have someone who has ambition, then you must encourage this. It’s to everybody’s benefit: the company and the employee.”

He emphasises the importance of communication in mentoring.

“If you don’t explain to people what’s going on, they get left behind. Tell them often where you’re going with the business and why you’re doing things in a certain way. When someone responds to the responsibility, it’s great. There aren’t many people like that around, so when you find them, nurture them!”

Mokhabuki says she is lucky to have had excellent support.

“I displayed a love for farming so my mentors were even more eager to teach me. The mentoring I received has brought me to where I am. They taught me everything from doing leaf and soil analysis to diagnosing a tree if it’s sick. These people have made me who I am today.”

Both women are studying part-time for agriculture-related degrees to enhance their skills. 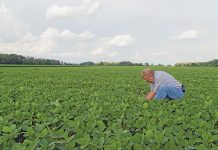