At the opening of the Undercover Farming Expo and Conference in Johannesburg recently, Thandeka Mbassa, head of the Gauteng Department of Agricultural and Rural Development, said climate-smart agriculture such as hydroponics will become more important if the sector wants to increase its contribution to the economy.

“At the time of the worst drought on record, it looks like we were caught napping as a country,” she said.

She said government would like to work with the private sector to increase the number of hydroponic farmers in South Africa.

“There’s a lot happening in the private hydroponic space and as government we are committed to working with the private sector,” she said.

In an opinion piece written by Suzanne Oosthuizen, managing director of Undercover Farming, she said that South Africa’s greenhouse and shade-net sector is growing. “The main reason would be for the good investment opportunities the industry offers,” she said.

READ How to get your livestock through the drought

Open land producers of citrus, berries, table grapes and vegetables are increasing their investment in shade-net covering as part of their operations to increase production.

Globally, undercover agriculture is gaining greater acceptance as the incidence of pests and diseases are lower compared to open land production. As the country’s climate becomes drier every year because of climate change, water conservation and increasing yields with the use of technology are going to become a priority, said Oosthuizen. 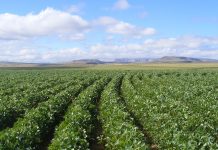