Home » Opinion » By Invitation » The case against holistic management

Roelof Bezuidenhout summarises a study by American ecologist, Dr John Carter, and five
other researchers, who question the holistic management grazing system’s assumptions
about grasslands and how they are grazed. 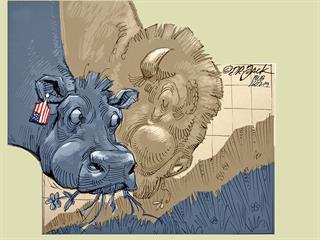 Claims of the benefits of holistic management (HM) grazing, or indeed of any grazing system, should be supported by scientifically validated studies, not anecdotes. There seem to be no peer-reviewed studies that show HM to be superior to conventional grazing systems, and there is little information about the total number of plant, animal or invertebrate species present when HM is compared with other grazing methods or to ungrazed areas.

Any claims of success due to HM are probably due to the management aspects of goal-setting, monitoring and adapting to meet goals rather than to ecological principles.

Ecologically, applying the HM principles of trampling and intensive grazing are as detrimental to plants, soil, water storage and plant productivity as the principles of conventional grazing systems.

The premise that rest results in degradation of grasslands because it allows biological crusts to persist and grasses to senesce and die, has been disproven by many researchers.

Reliance on hoof action to promote recovery through the mechanism of trampling seeds and organic matter into the soil and breaking crusts should be considered in the context of increased soil compaction, lower infiltration rates, and the destruction of biological crusts. The latter normally provide long-term stability to soil surfaces, enhance water retention and promote nutrient cycling.

Production in grasslands
In contrast to the assertion that grasses will die if ungrazed, bunchgrasses in arid environments are more likely to die if they are heavily grazed. Bunchgrasses are structured to protect growing points from damage, to harvest water, and to protect the soil at the plant base. Removal of standing plant material exposes the growing points, leading to death or replacement by invaders.
The HM assumption that increasing hoof action will increase infiltration has been disproved.

Livestock can compact soil, reduce infiltration and increase runoff, erosion, and sediment yield. Soil fertility and litter decomposition does not need hoof action, since even in the driest environments 100 million to one billion decomposing bacteria and tens to hundreds of metres of fungal hyphae are found in every gram of soil.

Rather than having a beneficial effect, hoof action by livestock has been shown to destroy biological crusts. These are a key component in soil protection and nutrient cycling, and destruction of the crust increases erosion and compaction and reduces fertility and water infiltration.

Research work carried out in South Africa and Zimbabwe has rejected many of HM’s underlying assumptions. It has been found that HM approaches also result in reduced forage production, reduced soil organic matter and nitrogen, reduced mineral cycling and increased soil bulk density (the weight of the soil which increases with compaction).

In the US, researchers found that under short-duration grazing, the standing forage crop declined as stocking rates increased. The stocking rate influenced the size of the area of bare ground and vegetation composition, rather than the system deployed.
Long-term range studies have shown that reduced stocking rates lead to increased forage production and improvements in range condition, not grazing systems. No grazing approach, including Savory’s, will overcome the adverse effects of drought, and/or chronic heavy stocking, on forage production.

Carbon storage fallacy
The recent claim that HM can capture atmospheric greenhouse gases and incorporate these gases into soils and plant communities, thereby reducing climate change effects, is disputed because the non-forested grazed lands of the world do not have the capacity to sequester current emissions. In fact, studies in grazed and ungrazed areas have shown that livestock removal of plant biomass, and altering of soil properties through trampling and erosion, causes loss of carbon storage and nutrients.

In any case, pasture-finished beef produced 30% more greenhouse gas emissions on a liveweight basis than feedlot beef.
HM is founded on the principle of moving large herds of animals, in tight groups across a grassland. This movement promotes close cropping of the grass, a necessary component of the HM system. At the same time, hoof action breaks up soil crusts, increases infiltration, plants seeds, and incorporates plant material, manure, and urine into the soil.

Carter’s study, however, suggests that HM’s assumption regarding the evolutionary adaptation of western American landscapes to large herds of hooved animals applies only to prairie grasslands. Most arid and semi-arid areas of western North America are not adapted to this kind of action.

Even on the large herbivore-adapted prairies, research indicates that not only does HM not produce results superior to conventional season-long grazing, but stocking rate, rest and livestock exclusion represent the best mechanisms for restoring grassland productivity, ecological condition, and sustainability.

Various other studies indicate that livestock grazing reduces biodiversity of native species and degrades riparian areas, with nearly all studies finding livestock exclusion to be the most effective, reliable means of restoring degraded riparian areas.
The fundamental approach of the HM system is frequent rotation of herds.

Though bison were abundant east of the Rockies on the Great Plains, they occurred in limited numbers across western Wyoming, north-eastern Utah and south-eastern Idaho. These low numbers and patchy occurrence would not have played the same ecological role as on the plains.

Other than bison in the Great Plains states, the evidence indicates a low frequency of large hooved mammals in the western US during pre-Columbian times, so the opportunity for hoof action to sustain grasslands and deserts appears limited at best. In contrast to HM claims, ungulates may avoid areas where predators have the advantage. Avoidance is not the same as panicked flight or tight groupings of animals promoting hoof action. Rather, the major response is greater vigilance and sometimes avoidance of risky areas.

Finally, the supposition that current western North American plant communities are adapted to livestock grazing because the region supported a diverse herbivore fauna during the Pleistocene epoch ignores the change in plant communities in the intervening time. The climate was much wetter and cooler than it is today. Drier periods following the Pleistocene, as temperatures warmed, have altered soil conditions and fire cycles and contributed to changing flora.

February 26, 2020
The risk posed by failures and inefficiencies at South Africa’s main ports to the country’s economy, particularly the damage this was doing to export competitiveness, was acknowledged in the Budget...