Farmers are custodians of these vital ecosystems. 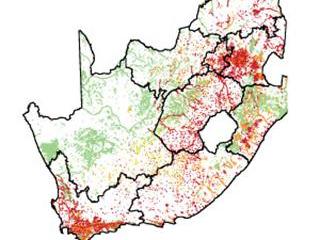 The recently released National Biodiversity Assessment (NBA) provides the first-ever national overview of South Africa’s wetland ecosystems. And the picture is bleak – no fewer than 65% of wetland ecosystem types are at risk. Of these, 48% are described as ‘critically endangered’, 12% as ‘endangered’ and 5% as ‘vulnerable’, making wetlands the most threatened of all ecosystems in South Africa.

This is of increasing consequence to farmers, as floodplain wetlands contain the highest proportion of critically endangered ecosystem types. They are followed by valley-head seeps and valley-bottom wetlands. Often associated with highly productive land, floodplain wetlands are often dammed, drained or bulldozed for agricultural purposes.

Off the map
Wetlands were not included in previous national biodiversity assessments as they are difficult to map. However, significant progress in this regard has been made in recent years, according to Mandy Driver, director of biodiversity policy at the South African National Biodiversity Institute (Sanbi), which co-ordinated the NBA. The first step was the creation of a national wetland inventory by Sanbi. Comparison of the threats to terrestrial, river, wetland, estuarine, coastal and inshore and offshore ecosystems.

This data was then used by the National Freshwater Ecosystem Priority Areas (NFEPA) project to produce the most comprehensive national wetland map to date, including about 300 000 wetland units covering a total area of 2,9 million hectares, or 2,4% of South Africa’s surface area. These units have been classified into different ecosystem types, based on criteria that included landscape setting, vegetation and hydrology. The map will be updated and expanded continually.

The NBA “will inform the revision and updating of key national biodiversity policies and strategies”, according to Driver.
“These instruments will collectively provide key building blocks for informed decision-making about future land-use planning, which underpins the building of a low-carbon economy supported by resilient ecosystems, and the creation of ecosystem-based job opportunities,” she explains.

The key phrase for farmers here is “future land-use planning”. Simply put, if farmers do not begin to take care of their wetlands and if necessary rehabilitate those that are damaged, they could be prevented by law from expanding the area under cultivation on their own farms.

Fortunately, wetlands are more resilient than many other ecosystems, explains Driver. As long as they have not been irreversibly lost to cultivation or put under concrete, many that are in poor condition can be rehabilitated to at least a basic level of ecological and hydrological functioning, thus restoring vital ecosystem services such as water purification and water supply regulation.

The big picture
Turning to an overall view of the situation, Driver points out that only 11% of wetland ecosystem types are well protected, while 71% are not protected at all, “reflecting the fact that wetland ecosystems have not been taken into account systematically in establishing and expanding land-based protected areas”. The assessment also found that the total area infested by invasive alien plants in South Africa doubled between the mid-1990s and 2007, and ecosystem services valued at over R6,5 billion were lost every year as a result.

The NBA involved the co-operation of several organisations, including the Council for Scientific and Industrial Research, the Departments of Environmental Affairs and Agriculture, Forestry and Fisheries, and SANParks. Undertaken over three years, it employs advanced techniques to provide a comprehensive picture of South Africa’s biodiversity on land and sea, highlighting spatial (mapped) information for both ecosystems and species.

Contact Mandy Driver of Sanbi at [email protected]. For a copy of the NBA report, visit bgis.sanbi.org