Now semi-retired from farming, Adriaan Odendaal of Villiers in the Free State is able to devote most of his time to the improvement of his almost 10-year old Rocky Droughtmaster stud. With the use of a new breeding method, he is confident that he will achieve his goal of breeding a uniform herd that is true to type within a few short years.

Just outside the small Free State town of Villiers, which lies on the border of Mpumalanga, is the land that has been farmed by three generations of Odendaals for over 80 years.

Adriaan Odendaal and his three brothers started farming here with their father, also Adriaan, in the 1970s, but when he retired in 1996, each of the brothers went their seperate ways.

Odendaal continued farming on the farm Uithoek, and he has recently handed over the reins to his two sons, Riaan and Gerrie. Both his sons produce soya beans and maize. Riaan inherited the Odensim-Simmentaler Stud. Gerrie and Odendaal’s granddaughter, Mariza van Niekerk, help manage the Rocky Droughtmaster stud.

“I started breeding Droughmasters in 2012. Ian Curren, who was the breed adviser for the Africa Droughtmaster Club at the time, invited me to attend a meeting with him in Parys about establishing the Droughtmaster in South Africa. At the time, I wasn’t even really aware that the breed existed, but my interest was piqued,” says Odendaal.

Shortly after this, Johan van der Nest, who introduced the first Droughtmaster genetics to South Africa in the 1990s, invited Odendaal to his farm to examine his cattle.

“I was immediately impressed with what I saw,” says Odendaal.

He then decided to start breeding Droughtmasters, buying in his first group of cows towards the end of 2012.

One of the Droughtmaster’s traits that convinced Odendaal to invest in the breed includes strong prepotency, which results in calves with a high level of uniformity in appearance and conformation, even when using the Droughtmaster in a crossbreeding programme, he explains.

His stud has since grown to include 260 female breeding animals, and while much of the focus up until now has been on increasing the size of the herd, Odendaal says they have started concentrating more intensively on improving quality.

Grazing and nutrition
Having delegated much of his farming business to his sons, Odendaal says he relies mostly on rented land for grazing. However, the parcels of land he rents do not have ideal camping systems in place to implement high-density grazing, he says.

For example, one piece of land he rents offers just one 300ha camp, while another farm is divided into two camps, one 30ha in size and the other 170ha in size. “The animals graze on the veld in winter and summer. As soon as we see that the available grazing in one camp is becoming depleted, we move them to another camp.”

The main grazing grass in the area is red grass (Themeda triandra). The veld has a carrying capacity of roughly 1LSU/3ha, and Odendaal maintains a similar stocking rate.

“During winter, when grazing is scarce and after Riaan and Gerrie have finished harvesting their crops, we move the cattle to graze on the stubble. This time of year (September), when even the stubble lands are bare and dry before the first rainfall of the season, we feed them Eragrostis bales that we produce ourselves,” Odendaal says.

The animals are given a 6% phosphate lick in summer and a 40% protein lick in winter. Calves are weaned at seven months and are then moved to a kraal where they are fed a daily ration consisting of hay, silage, chop and a protein concentrate. The weaners remain in the kraal until early summer, when they are about one year old, and are moved to the veld as soon as there is enough grazing available.

Breeding and selection
The first round of selection occurs at weaning when all calves that performed below average compared with the other calves in that group are removed from the herd. A similar selection process occurs when the weaners are moved from the kraal to the veld.

For heifers, the final round of selection happens after the first calving season. Heifers that failed to produce a good calf are culled.

Final selection for bulls takes place when they are around 30 to 36 months old, just prior to the Rocky Droughtmasters stud’s annual production auction. Bull selection takes into account, amongst other traits, growth, fertility, conformation, good hooves and ease of walking. Odendaal says a bull should have a strong, masculine appearance, including well-developed reproductive organs.

Heifers are bred for the first time at between 14 to 16 months, and deliver their first calves at around 28 months. The inter-calving period for all female animals in the herd is 412 days.

The main breeding season takes place in summer and runs from late November to the end of February, for calving to occur from September to December.

There is also a smaller breeding season for heifers that are only bred at 18 months; this season runs from mid-July to mid-September, for calving between May and June.

“This might sound light to some breeders, but keep in mind the grazing and other farming conditions in the area where we farm; these factors play a role in determining the weaning weights that can be achieved in a certain area.”

Odendaal mainly makes use of natural breeding, for which he maintains a bull-to-cow ratio of 1:30, but he has recently started using the transfer of fresh embryos, a relatively new technique, which he says has so far proven to have a higher success rate than the transfer of frozen embryos.

Making use of fresh embryo transfer will enable him to move forward more quickly in achieving greater uniformity in the herd. Odendaal plans to use this method to breed with genetics from only the best female animals, leaving the average cows to receive embryos from the better-performing animals.

Odendaal breeds his own bulls and buys in new genetics on a regular basis.

Commercial beef production
Droughtmasters are extremely resilient. For example, the breed has the ability to quickly recover from any stress, including after calving. This, according to Odendaal, is one of its most impressive traits.

“Any commercial breeder who wants to produce more uniform calves with performance abilities that are well adapted to South Africa’s variable climate should consider making use of Droughtmasters. This is according to some of the feedback I have received from commercial beef producers who bought Droughtmasters from me,” he says.

The fact that Droughtmasters have a red coat, which is very popular amongst South African farmers, and that the breed is 80% naturally polled, only makes it even more sought after.

“I want the people who buy bulls from me to become regular customers. This is why I go out of my way to source the best genetics I can find.” 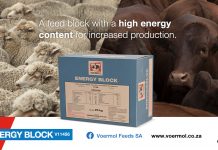