Home Crops Vegetables Advice on how to grow cauliflower

Growing cauliflower is very similar to growing cabbage. Nevertheless, there are some important points that need to be considered to ensure successful production of cauliflower.

Until about 35 years ago, it was very difficult to grow cauliflower successfully in summer. The sub-tropical areas had a short production period and the Highveld could not produce quality cauliflower in summer. This saw cauliflower being considered a winter crop.

Since then, breeders have been extending the climatic boundaries of the crop. But the hot South African summers remain a problem, as the tropical varieties that can cope with such conditions are not acceptable on our market. They have a slightly different leaf, mature very early and lack a head wrapping. As a result, the curd is exposed to the sun and loses the pure white colour sought by South African consumers.

They have a slightly different leaf, mature very early and lack a head wrapping. As a result, the curd is exposed to the sun and loses the pure white colour sought by South African consumers.

In tropical countries, consumers have no option and they have accepted this off-white colour as normal. The eating quality is not affected. Such varieties do not do well in cool conditions as it causes premature heading – the plant often makes a miserable little head soon after transplanting. At least market-acceptable varieties can now be safely grown throughout the year in Highveld conditions.

Growing time
In the past, we planted in late summer for a winter to spring harvest. Some varieties would take many months to mature and it was not uncommon to have a crop growing for six months or more.

Some of these varieties were also photosensitive and would mature more or less at the same time regardless of whether they were in the ground for three or five months. Most modern varieties are harvested at about 80 days in summer and slightly later in winter.

Head size
Another change has been in the size of cauliflower heads sold today. In the past, we would often harvest 5kg heads; today the required size is 800g to 1,5g.

Don’t take a chance with boron
Cauliflower is more susceptible to a boron deficiency than cabbage. This deficiency is usually noticed just before the harvesting stage and can be very costly. It manifests as sunken brown areas in the curd. When cut, the stem will be hollow, with a dark discolouration.

Unlike cabbage, once the symptoms of boron deficiency are seen, it is too late to rectify the problem. To avoid this from happening, make it a habit to administer two applications of boron as a foliar feed just to make sure there is enough.

Dealing with stress
Cauliflower is highly sensitive to stress. One setback can result in poor curd quality and lower yield. The stress can come in many forms – a heatwave, lack of water or lack of nitrogen. It can affect a crop quite a while before harvesting, and invariably leaves farmers puzzled – they do not associate the stress from much earlier with the present problem.

Stress symptoms include ‘hairiness’, light brown discolouration, pink or purpling of the curd, and loose or shallow curd. Heads can also be smaller. In a heatwave, you should irrigate to provide sufficient moisture in the soil. Frequent light irrigations also help to cool the crop and reduce stress. This is where a centre pivot or solid set irrigation system comes into its own. It may even pay to irrigate daily during a heat wave.

The need for nitrogen
Sufficient nitrogen is needed throughout to ensure quality and yield. In addition, nitrogen helps the cover leaves to grow, which in turn keeps the curd white.

Harvesting
It is always better to harvest in the early morning when the crop is cool and fresh and get it to the packhouse as soon as possible. This is especially important in summer. Cauliflower may not be the easiest vegetable to grow, but it certainly is simpler and more straightforward than it used to be, thanks to the modern varieties available.

This article was originally published in FW 20 March 2015 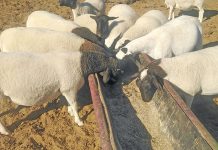