Cucurbits are a group of plants belonging to the gourd family (Cucurbitaceae). They include pumpkins and squashes (Cucurbita spp), melons (Cucumis melo), cucumbers (C. sativus) and watermelons (Citrullus lanatus).

Cucurbits were first cultivated in the Americas about 10 000 years ago; by 500 years ago, a number of distinct cultivars had been developed.

Watermelons were grown 4 000 years ago in North Africa. They remain an important crop there and in the Middle East, where the hot, dry conditions contribute to their popularity.

Melons and cucumbers are native to Asia; the latter are thought to be the last of the Cucurbitaceae to be domesticated.

The universal popularity of cucurbits means that new varieties are continually being developed. Tradition also determines which cultivars are popular in different regions and countries.

Various cultivars of the pumpkin species Cucurbita maxima are grown in South Africa.

White-skinned Boer pumpkins were the ‘standard’ variety for many decades until grey-skinned pumpkin varieties started to arrive from New Zealand and Australia.

This tastes better and is more productive. A good yield for a Boer pumpkin was 25t/ha; some grey hybrids can produce 60t/ha.

The pumpkin species grown in the US for Halloween is Cucurbita pepo, a different species to our pumpkins.

Every now and again, one comes across a newspaper article of a grower showing off a gigantic gem squash.

C. pepo also includes marrows and patty pans; all of these will readily cross with one another.

I am often asked if different species of cucurbits grown in the same area will cross with one another. They will not; it takes great effort and expertise to carry out an interspecies cross.

Slightly larger
Gem squash was developed by crossing two squash species: C. texana from the US and C. fraternal from Mexico.

The first South African gem squash cultivar was Little Gem, a flecked-skin variety with a better flavour than the original. The trouble, though, is that it quickly becomes stringy and the rind develops a yellow colour, so it has to be harvested at exactly the right stage, which is a constraint. Yields, however, are good.

Over the years, Little Gem has been largely replaced by Rolet, a slightly larger, dark-skinned variety developed by the Agricultural Research Council. Like Little Gem, it is a runner.

Better yields
Compact hybrid runners have since been developed for increased yields. These start bearing closer to the crown and offer a more concentrated yield.

Despite this, rows should not be planted too close together as this will reduce yield.

The plants are best spaced in rows about 1,8m apart, as in the case of runners. 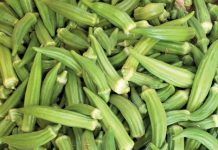 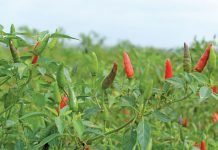