We need to take certain precautions when growing cauliflower that aren’t as important for cabbages or broccoli, writes Bill Kerr.

Bear in mind that with cabbages we eat the leaves and with cauliflower the flowering parts. It’s the flower which makes it tricky.

Seed producers understand the strict regime to follow for good seed production and how weather conditions can make so much difference. Cabbage is relatively forgiving when it comes to stress, while cauliflower is not.

Vegetable growers also know that weather conditions and stress can make certain crops bolt. Carrots are well known for this and I’ve even seen beet flowering before any semblance of a root starts forming.

Stress factors
With cauliflower we must remember that the flowering impulse and degree of response depend on conditions.

Stress due to heat, excessive cold, drought, lack of fertiliser or even excessive pests or weeds can cause a deterioration in the curd formation and yield.

Some stresses don’t take long to cause a disaster. Heat and drought stress is perhaps the worst combination.

Its effect can manifest weeks after the event if the bud is already starting to form. If you want to grow cauliflower, make sure you can take the crop through to harvest without any shortcuts.

A centre pivot or solid, set irrigation system offers a huge advantage – at some stage we’re going to have a heat wave, usually with a corresponding drought. We’ll need to apply more water to compensate but more importantly, to cool the crop down.

Sometimes the soil has enough moisture but we may need to apply light irrigations to lower the temperature, and prevent stress that can render the crop unmarketable.

The free water evaporates and cools the crop. Stand alongside the land which has been just irrigated and feel the cool air coming off and you’ll get the idea. You are in effect air-conditioning the land.

Modern varieties have an amazing number of leaves bred to cover the curd – usually we can’t even see the head unless they’re moved aside.

The curd is the flower and the plant’s main objective is seed production. Thus, stress in any form will tend to make the plant want to start seeding prematurely and the curd becomes exposed.

Sunlight then causes discolouration, but sometimes the curd can even become discoloured whilst still covered by leaves, and the size and shape can also be affected.

In some varieties, the curd may suffer a pink discolouration under stress, which is also linked to low nitrogen levels in many cases. Ricey or hairy curd is also induced by stress.

Variety variation
Some varieties are more sensitive to stress than others. If you’re growing more than one variety at the same time, it will pay to check the differences between them during stress, perhaps induced by a pump failure or cable theft.

Finally, compared to other cruciferous crops, cauliflowers are more sensitive to a boron shortage.

It isn’t worth taking a risk and boron foliar feed applications should be part of routine management.

Some varieties are also more sensitive than others, but we shouldn’t necessarily discard a variety that shows more symptoms. If the variety with symptoms is given sufficient boron, it may still be better. 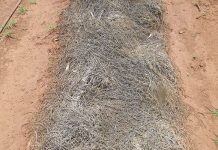