Home » Farm Basics » How to Crop » Controlling insects with insects

Biological control is – or should be – an important way of managing crop pests for all farmers, whether emerging or commercial. Paul Donovan explains why.

There are many different types of crop pests. Caterpillars, grasshoppers and locusts can easily be seen and dealt with. They feed on succulent leaves, often eating them down to the stem, or bite chunks out of the leaf before moving on to the next one. This is particularly destructive. The damaged leaves cannot produce food via photosynthesis, and eventually wither away and die.

Some pests suck the sap from stems. Twig wilters, for example, inject saliva that makes the sap easier to suck up. The plant then withers and dies above the point in the stem where the saliva was introduced. Other pests may be less obvious, because they live beneath the surface and attack plants from the roots upwards. A damaged root system has difficulty absorbing the water and nutrients needed for plant growth.

As farmers in Africa, we’ve barely started tapping into this form of pest control. In fact, very few even know what biological control is about. Simply put, it’s about manipulating the food chain to our advantage. Planted crops provide an abundance of food for pests. Predators should be encouraged to come in and control them. Ladybirds are among the most welcome biological control agents. Katydids have long hind legs and antennae. They are mainly nocturnal. Spiders such as this banded orb-web spider predate on insects.

Predator attraction
One of the benefits of using predators to combat pests is that most of them occur naturally. Predators will remain in local areas as long as there is food, in the form of prey, available. There may be times when the predators need to be enticed. This can be achieved by planting the specific plants that act as their food source.

If the adult feeds on nectar or pollen, and the larvae on pests, planting a row of plants, such as sunflowers, along the edge of a land will bring in the adult insects. Leaving a few flowering trees along the borders of the land will have the same effect. It also serves to draw pests away from crops. Once the predators arrive, many may congregate on one plant, feeding on the associated pest. Gently remove a few and place them on other plants.

For example, you only need a couple of ladybirds or their larvae on a plant to control an aphid invasion. Spreading them around a bit is better than letting them find their next meal. A ladybird may fly away after a meal and not move from one plant to the next. In the end, it’s really very simple – actively encouraging one type of insect to feed on another can often be a much more effective means of control than other methods we have at our disposal, and has the benefit of causing less harm to the environment.

Beware of those chemicals
There may be times when we need to use insecticides on our crops. But whenever possible we should try to use one that won’t destroy beneficial insects. However, insecticides often kill as many beneficial insects as they kill pests. Don’t automatically assume that insects on the crop are pests. Instead, do some research to see if the insect can be used as a biological control agent.

Being in too much of a hurry to spray with insecticides can easily disrupt a balanced food chain. On the other hand, tinkering with the food chain by introducing biological control agents to feed on pests can actually make that food chain work in your favour.

Paul Donovan is a biologist who specialises in reptiles and insects. Contact him at [email protected]. 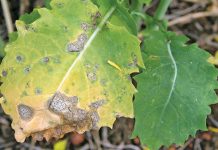