Chameleons may look like mini dinosaurs, but they’re a highly evolved kind of lizard with unique abilities, “modifications” and “specs”. But their numbers in South Africa are declining, writes AbrÃ© J Steyn, with several featuring on the International Union for Conservation of Nature’s endangered list.

Imagine that some guys returning from an expedition into the deepest jungle announce they’ve found a live dinosaur. The world media and scientific community would be buzzing! But if they were to announce that what they’d seen was some kind of weird new lizard, nobody would bat an eye. To most people a lizard is just a lizard – a flat little reptile with short legs that can run very fast.

But the description of this supposed lizard would be so bizarre that if you’d never seen one or heard of one, you’d think it was a figment of a mental patient’s imagination. Because this lizard, while also flat, is additionally flattened from side-to-side and there’s a sharp ridge on its back adorned with saw-like teeth. Its body, which can rapidly change colour at will, is shaped like a leaf and although it has quite long legs, it can’t run. Instead it walks very slowly and moves with a seesawing motion.

Its parrot-like feet are completely different from those of other lizards and resemble small mitten-wearing hands, able to hold a twig like one would hold a fishing rod. Its tail acts like a fifth hand and unlike those of all other lizards, it can be rolled up like a clock spring when not in use.

This lizard has large, highly mobile, stereoscopic, turret-like eyes, which can swivel independently in any direction and can even look forwards and backwards at the same time. Like a pelican, this lizard has a pouch under its mouth which can be puffed up when it’s enraged, and believe it or not, its tongue is longer than its entire body – for its size, it’s the longest tongue in the world!

By this time it should be clear that I’m not referring to any “mystery lizard”, but to the familiar chameleon, which most of the older members of society grew up with. When I was a child, they were our play-things – we chased the little girls at school with them and scared the living daylights out of servants, who believed they were deadly venomous.

Sometimes my mother kept them in the house to catch flies, and hardly a week went by without me encountering one or more chameleons among the roses in my father’s large rose garden. Here they preyed on the numerous butterflies, bees and other insects visiting the flowers.

One day, when I was somewhat older, to my horror I found one hanging seemingly lifeless from a sharp rosebush thorn by its tongue. Apparently he’d shot his tongue straight into the thorn in an attempt to catch prey. His tongue was already completely desiccated and resembled a dried-out twig. After I dribbled some water into his mouth he recovered, but all my attempts to re-hydrate his tongue were in vain. It was heart-rending to see him dragging this useless thing, stuck to his throat behind him, and when it broke off after a few days it was a relief.

I kept him in my room and called him Platanna, after the clawed frogs which were the only other animals I knew that were tongueless. I tried to feed him on moths and disabled flies, but although he trained both eyes on the target and slightly opened his mouth, he didn’t seem to understand he had no tongue left to shoot at them. Eventually he grabbed a fluttering moth which I was holding right against his nose.

Later, when he could eat well, I moved the insects away just as he was about to grab them, teaching him to chase moving insects like other lizards. By the end of the season, when insects became scarce, I made little Pronutro balls, which he took when I rolled them in front of him. Platanna became fat on them but when it became colder, he escaped through the window. Although I thought this would be his end, I saw him again the next summer in the rose garden.

In South Africa, we have a larger variety of chameleons than most people realise. At least 17 species occur within our borders and they can be found from the moist coastal forests to the Namib Desert. Their numbers have, however, dwindled significantly, but none of them are listed by our Department of Environmental Affairs and Tourism as threatened or protected. This is a disgrace and once again emphasises the lack of expertise in the department.

This is especially apparent if you take into account that at least two chameleons are classified by the International Union for Conservation of Nature (IUCN) as threatened, two as endangered and one as critically endangered, meaning it’s nearing the end of the road and a sad end for the species.

Unfortunately old Platanna’s story also had a sad end. That summer it rained a lot and the chafer beetles multiplied. In the morning they were centimetres deep on the porch, where the light had been left on all night, and they wreaked havoc on the roses. My father was desperate, bought some poison and sprayed the roses. Next morning two chameleons lay dead on the ground and a third hung by its tail from a bush, its tongueless mouth agape. It was old Platanna.

Sadly this has been the fate of countless chameleons in our gardens and on our farms and today you would search in vain to find these little marvels of creation. If you still have some around, cherish them and realise that the insects they prey on are vital for their survival. Field sports people, and others who often frequent the wilder and less disturbed or contaminated parts of our country, may still come across them. But don’t take them home – leave them where they belong and where they are relatively safe and have existed for millennia. 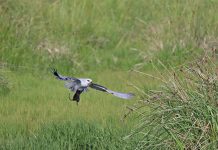