Home » Lifestyle » Agritourism » Understanding each other

Animals communicate effectively, even across species. But only humans use complex language, and today we communicate worldwide instantly, says Abré J Steyn. 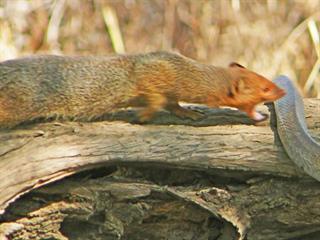 It was still early morning, but being midsummer, it was already hot in the Lowveld bush where I live. A tree squirrel was kicking up a racket at the bird pond, where the first sunrays was filtering through the tamboties. Squirrels are very alert at spotting any predator in their vicinity, whether a snake, an eagle or any of the large nocturnal predators that sometimes venture out in daylight.

When the chattering outside grew louder and more persistent, I moved my wheelchair to my desk at the window overlooking the pond. The squirrel, which meanwhile had come down the tree, was now hanging over the log on the pond’s spillway, nervously flicking its tail and focusing its attention on a big mamba slaking its thirst underneath the log. When the mamba had finished and slid onto the log to bask, the squirrel retreated, but became almost hysterical.

Its persistent, rasping “tck-tck-trrr-tck-tck” had by now attracted a variety of birds, including a noisy chorus of arrow-marked babblers. My wife, who arrived to see what all the fuss was about, stood behind me. She noticed a slender mongoose single-mindedly running up the slope from the dry riverbed. Arriving at the pond, it spotted the mamba and without a moment’s hesitation attacked it.

In a blur of movement, the mamba and the mongoose cartwheeled out of sight, but soon the snake reappeared and streaked up a tree. The mongoose jumped after it and plucked it to the ground. The 3,5m mamba made no attempt to fight back and simply tried to escape, which it eventually did by disappearing into the thick underbrush, while I sat pondering what I had just witnessed. It was a remarkable demonstration of animal communication across species barriers.

Messages
There are thousands of examples of how animals and even plants communicate messages to each other in the wild – enough to fill volumes. We’ll touch on only a few. When we think of animal communication, we automatically think of the sounds they produce – the call of a fish eagle or hyena, or the noise of a cicada.

Some calls, like the roar of a lion, are mostly used to proclaim territory. The croaking of frogs is used to attract mates, while the singing of songbirds does both. Elephants and whales communicate over immense distances, using infrasound so low in frequency that we can’t hear them. In fact, the marine world is a cacophony of fish sounds, inaudible to us.

Other ways animals communicate include facial expressions, postures, gestures and body language, like the baring of teeth by a cat or dog, as well as the way it uses its tail and body to indicate mood or social rank. Most carnivores, like hyenas, lions, leopards and bears, use this method extensively, while most primates – especially the higher apes – also use facial expressions.

Apart from the light produced by fireflies, many fish and other marine invertebrates also use bioluminescence, while some freshwater fish in turbid rivers use electrical impulses for navigation and communication. Of all beings on this planet, humans are, however, the kings of communication. It was not only our superior intellect, but also the development of language, which made us the world’s most precise communicators and gave us the upper hand over all other creatures.

Language made it possible to convey and share gained knowledge, new ideas and inventions among individuals and later among different populations. However, for millennia the spread of information and knowledge was slow because it depended on the movement of people on foot, personal contact and the spoken word.

Once writing was developed, the spread of information grew. Information chiselled onto rocks or written on clay tablets was passed on between generations and preserved for posterity. Around 60 BC, Julius Caesar ordered government bulletins to be carved in metal or stone and posted in public places. However, it was not until the development of easily portable media, such as papyrus rolls and paper, that written communication became widespread.

Letters and books could now be written by hand, but the delivery of mail was slow and often unreliable. It’s an interesting fact that decades before Europeans settled at Table Bay, the location was used as a post office by crews of eastbound vessels who left letters to shipping companies and loved ones back home under special ‘mailbox stones’ on the beach, to be picked up by ships passing in the other direction.

But it was the invention of the printing press in 1440 by Johannes Gutenberg which allowed the mass production of printed books that later heralded the publication of the first proper newspaper, the Strasbourg Relation, in the early 17th century and the first general-interest magazine, The Gentleman’s Magazine of 1731, in London. Like the words you are reading now, which allow you to visualise the episode of the squirrel and the mamba, they could relay the thoughts of the writers to a vast number of readers.

The communication revolution was on us. Today we live in a world dominated by this revolution, whether we like it or not. It determines what we think, what we do and what we are. Telephones, faxes, televisions and computers rule our lives and most of us go nowhere without our cellphones, although they cost us a fortune. Despite what we think, none of these devices is really new.

Some are over a century old. The first computer was invented in 1822 and all the others date back to the first half of the previous century. It is only during the last two decades that our lives have been really engulfed by it; the internet was launched 21 years ago to provide us with information at our fingertips.

Are we really in touch?
It’s ironic that with all these almost supernatural means of communication, people seem less and less able to truly communicate with each other. How often does it not happen that you visit people, only to sit around a TV set, unable to carry on a normal conversation, while the children, oblivious of what goes on around them, are glued to iPods or cellphones?

If you must communicate electronically, there is just one internet service that has any semblance to an old-time conversation: Skype. Launched in 2003, it currently has 310 million users, and it’s no wonder, because like something from a science-fiction movie of not long ago, it’s sheer magic. Sitting at home you can now visit a friend or loved one anywhere in the world, and provided he or she is also a signed-up user and both computers have clip-on video cameras (new computers come so equipped), you can see each other and chat to your heart’s content.

The cost is no worry because, apart from a few bytes from your bandwidth, the service is free. In addition, you can send photographs, as well as ring any phone anywhere at a fraction of the cost of normal landline phones or cellphones. If your signal is too weak for the camera or phone, you can still write simultaneous messages from both sides. It’s very fast. It beats me why it’s not used by all South Africans with internet access. In my view it’s the most advanced communication system yet devised.