Basing a business strategy on long-term economic forecasts is about as safe as using tea leaves and crystal balls, says Theo Vorster,
CEO of Galileo Capital. 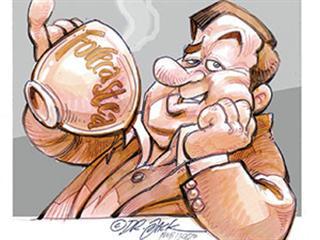 Are you betting on long-term future forecasts for business success? In that case, I’ll do some betting too: that your business strategy will fail. Statistics show that a prediction of longer than three years has little value, because the future is too uncertain. This is illustrated by the Reserve Bank’s decision in May to lower its economic outlook for the year from 2,7% to 2,4%. Gill Marcus, president of the Reserve Bank, has already said the bank is considering lowering the outlook even further.

Equally, long-term predictions of the future of the rand or oil prices don’t work, because there are too many variables. And even if you do succeed in guessing correctly in one year, you’ll fail over the long term. Billionaire share tycoon Warren Buffet (82) holds an annual event where he shares his predictions for the coming year. At the last meeting, an audience member told him that his financial advisor had given him the advice to sell all his shares just before the economic crash in 2008.

After the crash the advisor had told him to rebuy all his shares. This had led to a massive gain by the audience member.  The question he posed to Buffet was: “My advisor has once again told me to sell my shares. What should I do?” To this, Buffet replied that he needed to fire his advisor, because a person might get lucky once, but there is no sure sign of reading market signals. In the long run, one will simply lose if one plays the game in such a manner. The answer? Forget about guesstimates and focus on long term trends.

Have clear priorities
Laurie Dippenaar, co-founder of First Rand Limited, once told me he didn’t plan on building a banking empire. He and his partners were simply three men who started a financial services company. At the beginning, they even struggled to pay salaries. But they had a clear vision of what they wanted to achieve over a long period. Laurie said it was “a touch of luck” that Dr Anton Rupert told him he wanted to sell Rand Bank.

Coming boom for agriculture
When it comes to agriculture, what do we know for a fact? Let’s start with the fact that global poverty has halved in recent years. Two decades ago, two billion people were living below the breadline. Today one billion people can be classified as extremely poor. The global population is about seven billion, of whom about two billion live in the Western world. These regions are still trying to sort out their debt crises, so opportunities for expansion into these markets are limited.

This leaves five billion, and the fact is that the incomes of these people have grown significantly over the past few years. Here is excellent news for agriculture. Urbanisation is a tell-tale sign of a developed country. An average of 75% to 80% of citizens in developed countries live in cities. This means that 500 million Chinese citizens will probably be moving to a city within the next three decades. To accommodate them, no fewer than 50 London-sized cities will have to be built. Similar conditions are at play in Africa.

Remember too that the middle class is still growing. These fivebillion global consumers will become seven billion during our lifetime, every one of whom needs to be fed. In the past, 1ha of land had to feed one or two people. Soon, six or seven people will have to be fed from that same hectare.

Realistic, but positive
This does not take away the realities of subsidies and tariffs. Agricultural subsidies in the USA might focus more on insurance than inputs in future, but the subsidy system will remain in place. On the other hand, South Africa’s farmers should not rely on local authorities to protect them against imports. Farmers have to come to terms with this. Rather than simply being negative about things they cannot change, they should be positive about opportunities.

In the end, it’s those who can identify these who will be successful in the long run. Based on a speech by Theo Vorster at the recent Northern Cape Red Meat Producers’ Organisation’s congress.