Home » Opinion » By Invitation » The ethics of climate change

Professor Martin Rees, Astronomer Royal, former president of the Royal Society, and emeritus professor of cosmology and astrophysics at the University of Cambridge, looks beyond 2050. 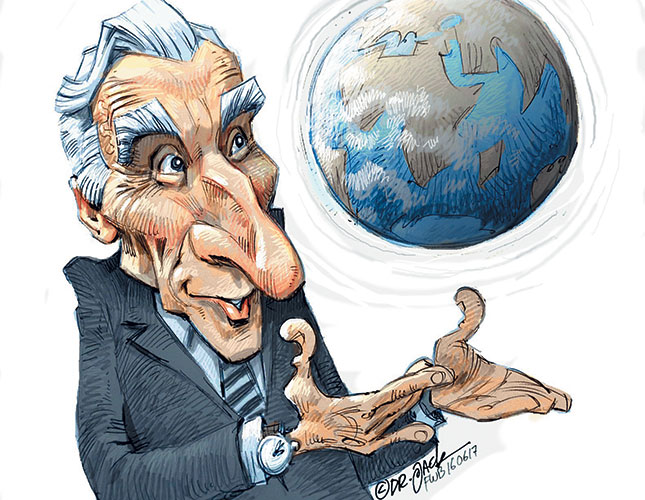 As an astronomer, I am mindful that Earth is 45 million centuries old and that this century is the first when one species can determine the fate of the biosphere.

Down the millennia, people have been vulnerable to natural threats such as earthquakes and volcanoes. But the annual probability of these disasters has not changed much since the time of the Neanderthals (although today, admittedly, the economic consequences have become far greater).

We are now deep into the ‘Anthropocene’, the new period in which human activities have a global impact on Earth’s ecosystems. The pressures of a growing human population and economy on land and water are already high. And unlike the familiar natural threats such as earthquakes, the risks of climate change are growing, and will continue to increase.

When scientists study facts, they must be as objective as possible. But when scientists discuss the economic, social and ethical aspects of any issue, they speak as citizens and not as experts, and they then have no particular authority. This distinction is important, so that there can be no confusion between what is science, and what is opinion.

As a concerned citizen, I am of the opinion that the present disagreements about climate policy stem less from differences about the science than from differences in ethics, particularly in the extent to which we should feel obligations towards future generations.

Those who value the risks of climate change by applying a standard discount rate to estimates of future costs are in effect writing off whatever happens beyond 2050. There is indeed little risk of catastrophe within that time-horizon, so, unsurprisingly, such analysis concludes that tackling climate change should be given a low priority compared with other public policy aims.

We owe it to our children, the poor, and biodiversity
A child born this year could easily live beyond the year 2100. The grandchildren of young adults alive today could live through several decades of the twenty-second century. This is the most compelling argument for acting on climate change.

Suppose astronomers had tracked an asteroid, and calculated that it would hit the Earth in 2080, sixty-five year from now, but with a 10% probability. Would we relax, saying that this is a problem that can be set aside for 50 years – as it may miss Earth anyway? Or would there be agreement to start straight away and do our damnedest to find ways to deflect it, or mitigate its effects?

A second ethical issue concerns our obligations to people who are remote not in time but in economic opportunity. Climate change will hit hardest those who have contributed the least to its cause.

Heat stress will most hurt those without air-conditioning; crop failure will most affect those who already struggle to afford food; extreme weather events will most endanger those whose homes are fragile. A decision not to act on climate change is a decision to inflict suffering on a grand scale.

A third ethical issue concerns the non-human environment. Humans are already threatening biodiversity. The level of current extinctions could eventually be comparable to the five mass extinction events in the earth’s history, of which we have learned through the fossil record. As some have said, we are destroying the book of life before we have read it. If fish stocks dwindle to extinction, we lose a source of food. There are plants in the rain forest whose genes may be useful for medicine.

For many people, religious faith is a source of guidance on questions of ethics. As a believer in a constructive dialogue between science and religion, I know that people from many faiths feel decisive mitigation of climate change is a moral imperative for humanity.

Europe’s great cathedrals still overwhelm us today. But think how they seemed at the time they were built, and the vast enterprise their construction entailed. Most of the builders knew little of the world beyond their own villages. Even the most educated knew of essentially nothing beyond Europe.

They thought that the world was a few thousand years old, and that it might not last another thousand. But despite these constricted horizons, in both time and space, despite the deprivation and harshness of their lives, despite their primitive technology, they built these huge and glorious buildings, pushing the boundaries of what was possible.

Those who conceived these masterpieces, and those who built them, knew they would not live to see them finished. Their legacy still elevates our spirits, centuries later.

Unlike our forebears, we know a great deal about our world, and indeed about what lies beyond. Many phenomena still make us fearful, but the advance of science spares us from irrational dread. We know that we are stewards of a precious pale blue dot in a vast cosmos – a planet with a future measured in billions of years whose fate depends on humanity’s collective actions in the course of this century.

In this fast-moving world, we cannot aspire to leave a monument lasting a 1 000 years, but it is shameful to persist in policies that deny future generations a fair inheritance, and instead leave them with a depleted and more hazardous world.

To design wise policies, we need all the efforts of scientists, economists and technologists, and the best knowledge that the 21st century can offer. But to implement them successfully, we need the full commitment of political leaders and the full support of the voting public. Our responsibility – to our children, to the poorest, and to our stewardship of the diversity and richness of life on Earth – demands nothing less.

This article was originally published in the 17 June 2016 issue of Farmer’s Weekly.