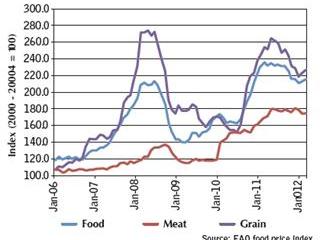 Global food prices increased by an average of 57% from 2006 to 2008. Many believed the very high 2008 prices were sustainable in the longer term, while the more cautious warned that prices were inflated and would probably decrease in the future. However, all agreed the era of low food prices was over.

Then came the 2008/09 recession and food prices decreased by 22% from 2008 to 2009. But at their lowest level, at the beginning of 2009, global prices were still higher than before the increase. As the effect of the recession weakened, prices started to increase, and in April 2011 a new record level was reached.

Since then, prices have slowed again. By February this year they were on average only 7,5% higher than the 2008 peak (see Figure 1). The decrease in global prices since August 2011 is seen by some as an indication that prices will now collapse to the pre-2007 level. However, while the volatility of global prices makes it difficult to forecast future prices, it’s clear the factors that have been affecting global food supply and demand over the past few years are all still present and will continue to drive prices in the future.

On the demand side, the population in developing countries is still growing at a rapid rate. The growth in income of the emerging middle class resulted in increased protein demand, and this will continue and even accelerate as economic growth in developing countries continues at much higher rates than in developed countries. The higher demand for animal protein has, in turn, seen increased grain demand for feed purposes, while the demand for grain for biofuel production will probably continue growing.

In South Africa
These international trends also influence supply and demand in South Africa, where the income distribution of the population has changed substantially. Demand from the new middle class is already a main driver of food demand and will continue to be so.

The outlook for global grain production in 2012 is positive. Demand for grain increased by 2% in 2011 and will probably continue to grow, mainly driven by increased demand from Asian countries. The record 2011 grain crop will boost grain stock.

Maize and meat
Locally, a large maize crop is again expected. However, Safex prices are nearer to import than to export parity – a clear indication maize users are worried about the availability of maize on the SA market. Prices will probably move sideways as harvest time approaches, then increase as users who waited for the July 2012 price to drop realise they missed the boat and rush to fill their demand.

The international outlook for livestock is less positive. Beef, mutton and poultry prices are under pressure and will probably decrease slightly in the short term. SA meat prices increased sharply in 2011, but softened somewhat during the past three to four months. High grain prices reduced the profitability of feedlots and had a depressing effect on weaner prices.

A huge number of calves fed on pasture also reached the market and pushed prices down. Consumers are historically not price sensitive when it comes to lamb. However, at very high prices, income elasticity plays a role, and the consumer can’t buy the same quantity of lamb chops at these prices.

Livestock producers currently face higher input prices, while their selling prices are under pressure. This situation won’t last long. Demand will soon catch up with supply, resulting in relatively higher prices. The bottom line is farmers must be very careful not to make long-term decisions based on this short-term slowdown in prices.

Dr Koos Coetzee is an agricultural economist at the MPO. All opinions expressed are his own and don’t reflect MPO policy. Contact Dr Coetzee at [email protected]. Please state ‘Global farming’ in the subject line.