Switzerland has long been famed for what some describe as ‘stinky and holey’ cheeses. However, as Lloyd Phillips discovered, there is much more to Swiss cheeses. Some, for
example, are produced and matured under highly unconventional circumstances. 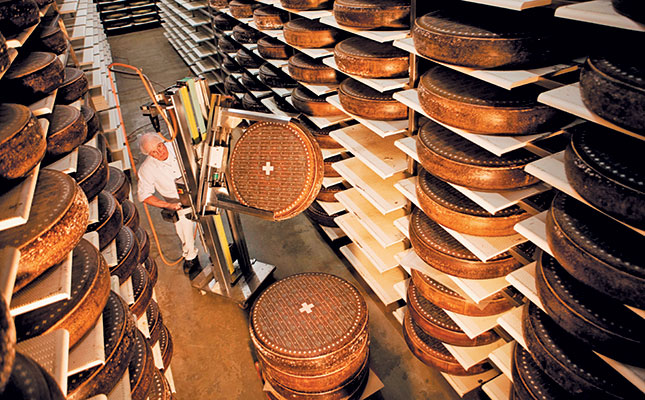 Some cheese fanciers can doubtless detect the aroma of their favourite Roquefort or Stilton from several metres away.

But even the most ardent turophile would walk over one of the greatest treasures in the world of cheese and be unaware of it.

Approximately 15m below a picturesque tree-covered hill in the Swiss canton of Lucerne lies a 2,3km-warren of man-made tunnels. And slowly maturing in this labyrinth of sandstone and soil-percolated moisture are no fewer than 100 000 cheeses.

These are the premises of the Kaltbach cave cheese production facility, and are the pride of cheese- and yoghurt-producing multinational company, Emmi.

Unique in a highly competitive market

Milk goat breeds include the world-renowned Saanen and the Toggenburg, as well as the indigenous, long-haired white Appenzell, the Capra Grigia, which originates in the eastern Productionand southern parts, and the Valais Blackneck, with its distinctive black-and-white colouring.

According to the Swiss Milk Producers’ Association, in 2016 alone, more than 21 000 dairy cattle enterprises collectively supplied 3,4 billion kilograms of milk to an array of processors across the country. Some 41% of this was used to manufacture nearly 185 000t of cheeses, many of which are internationally renowned.

Unsurprisingly, competition among manufacturers is high. It was an astute decision on Emmi’s part, therefore, to purchase the famous sandstone cave in Kaltbach, already in use by a smaller cheese manufacturer, in 1993.

Being able to produce cheeses under these almost mystical conditions has given Emmi a singular competitive advantage.

“The sandstone maintains the humidity of the cave at a constant 94% and a year-round temperature ranging from 10°C to 12,5°C,” says Walter Burri, cave master at Kaltbach for more than 30 years and head of its 60-strong team.

Cheese needs time, an appropriate climate, and 33“attentive care” to develop its distinctive taste, he adds.

“After several months, the cheeses reach the perfect maturation point and develop their full character and dark-brown rind. The process is called ‘cave refinement’.”

When Emmi bought Kaltbach, the cave system was 1 000m long and could house and mature 13 000 roundels and blocks of cheeses at a time for up to 300 days. This facility was used unchanged for the next 15 years.

Finally, however, the company’s grand plan to increase the cave’s size was put into action. Work began in June 2008 and was completed in October 2010.

According to Robert Kistler, the architect responsible for the expansion, an additional 1 300m of tunnels were excavated using a road header machine. This required the removal of 82 000m³ of rock and sand in about 3 400 truckloads. The total cost of the expansion was 15 million Swiss francs (more than R200 million).

The cave system now comprises six parallel passages, each 190m long and connected by a 130m access gallery. Each tunnel is about 5m wide and 6m high, and a total of 17 intersections enables Kaltbach employees to move relatively easily through the maze.

The expansion also allows for a more diverse range of cheeses to be cave-refined.

“Cheese connoisseurs love the specialities from the Kaltbach cave,” Emmi CEO, Urs Riedener, said at the official opening of the expanded facility in 2010. He said that demand for Kaltbach’s ‘specialities’ had risen in the US, the Netherlands, Germany, the UK, South Africa, and elsewhere.

Over the 24 years that the company has owned the cave facility, it has expanded its range of Kaltbach-branded cheeses to seven: Le Gruyère cheese of origin; Emmentaler cheese of origin; Extra Tasty; Creamy & Tasty; Raclette; Fondue; and the goat-milk cheese, Le Chèvre.

Since 2010, Kaltbach’s cave-refined cheeses have won an array of bronze, silver and gold medals at the prestigious annual World Cheese Awards. In 2013 and 2015, for example, Kaltbach Le Gruyère cheese received ‘Super Gold’ medals, and in 2014 it was a ‘Major Winner’ in the competition.

During their time in the cave system, Kaltbach’s cheeses are turned regularly and meticulously brushed with saline solution to facilitate even maturing throughout each cheese roundel or block.

Given the large number of cheeses in the cave at any time, and because the roundels can weigh up to 100kg each, Kaltbach uses specialised lifting equipment to carry out this arduous, but crucial, chore.

Don’t mind the mould, or the smell
Visitors to the tunnels are assailed by the pungent ammonia smell emanating from the young cheeses, a sure sign that various harmless bacteria are at work on the cow and goat milk curds.

Almost as strong, however, are the enticing aromas of the mature cheeses almost ready for shipping.

On some of the younger cheeses you can see what appears to be a fungal growth covering the rind. The guide gives his assurance that this is harmless; indeed, it is an integral part of the ageing process of the cheeses.

Steady growth in exports
In 1998, prior to its expansion, the Kaltbach facility produced just over one million kilograms of various cave-matured cheeses. Just under half of this was sold in Switzerland, while the balance was exported.

Looking to the future of Emmi’s Kaltbach cheeses and the cave facility in which they are matured, CEO, Urs Riedener, says: “We hope to bring more cheese lovers to get to know our wonder of nature, the Kaltbach cave, as well as our unique masterpiece cheeses.”

Farmer’s Weekly visited Kaltbach while on the ‘Food Security, Free Trade and Sustainability’ media tour, hosted by the Swiss Agricultural Journalists’ Guild and the Swiss Confederation, from 22 to 25 September. (Lloyd Phillips’s flights were sponsored by Monsanto South Africa.