Losses of livestock and infrastructure are expected to run into millions of rand following the devastating wildfires that raged across large parts of the Free State during the past week.

This was according to Jack Armour, operations manager for agricultural development, transformation, natural resource and commercial activities at Free State Agriculture.

He said early estimations indicated that more than 1 800 head of livestock had perished in the fires. Estimated losses of infrastructure are not yet known. 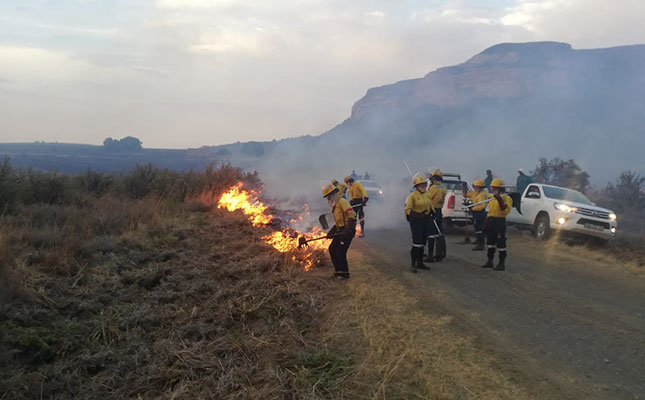 Farmer’s Weekly previously reported that raging wildfires had destroyed over 100 000ha in the western Free State since Sunday, 18 October, which were reportedly started when service delivery protesters burned tyres on the R708 road between Hertzogville and Christiana.

Armour confirmed that by Friday, 23 October the fires had been brought under control.

“The actual damage will only be able to be determined after five days when all [the satellite] data will be available.

“It is currently estimated that more than 100 commercial farmers have been affected, [while the number of smallholder] farmers are unknown at the moment.”

Also speaking to Farmer’s Weekly, Wayne Mokhethi, spokesperson for Working on Fire (WOF) in the Free State, said the fire had been contained by the evening of Thursday, 22 October, but thunderstorm activity and extremely strong wind in the area had re-ignited it, and the fire then spread rapidly.

“Four WOF teams were dispatched and they conducted back-burns in an attempt to contain [the situation].”

He added that more thunderstorm activity resulted in the direction of the fire changing, and a WOF spotter plane was dispatched early on Friday, 23 October to help teams on the ground contain the spread.

Mokhethi said this had been one of the worst wildfires the region had experienced in many years, as a vast amount of fuel-load had been building up, which had resulted in the intense and fast-spreading wildfire.

He also confirmed that wildfires were currently raging in North West, but said a similar outbreak in the Singisi area in the Eastern Cape had been contained.