Developing machine-shearing skills in the South African wool industry could arm shearers with the expertise to pursue potentially lucrative careers in countries such as Australia and New Zealand. 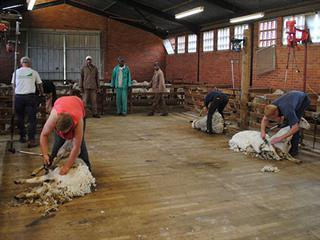 Sheep shearing is a respected international career, especially in Australia and New Zealand, where top professional shearers are celebrated.

However, according to Stutterheim farmer Quinton Rogers, South Africa is quite a way off the international pace as far as machine shearing goes and it is still underrated in this country.

“A man who can shear 200 sheep a day is quite special – that skill is not fully appreciated here,” he says.

The courses are run under the close scrutiny of National Wool Growers’ Association (NWGA) instructors.

“In Australia, it has been proven that a shearer is four times fitter than a Wallaby rugby player,” he says.

One South African who has found fame in the international shearing arena is former WAHS student Kenneth Norman.

He now lives and farms in New Zealand after years of professional shearing across the world.

After Kenneth matriculated from WAHS in 1994, he enrolled for a diploma in agriculture at the Port Elizabeth Technikon and in 1996 won the SA National Student Championships. Because of his achievements, he was offered an opportunity to be the manager/ interpreter of the SA shearing team that visited New Zealand in 1997. This visit launched his international machine-shearing career.

In fact, for the next seven years, he competed in a world tour of machine shearing that included stints in New Zealand, the USA, the UK and Australia. During this time he also met his future wife, Steph, an expert Kiwi wool classer. “We were young, keen and loved the job – the big goal was to see how many days straight we could shear, my record was 46 days,” he recalls.

Kenneth stresses that any shearer wishing to make a career in machine shearing in New Zealand or Australia must shear between 120 and 200 sheep a day. “You’d probably need to be able to shear at least 170 to 200 a day in New Zealand, but crossbreds can be shorn quicker than Merinos.”

He adds that in Australia one needs to shear 120 to 150 a day just to get onto a learner stand. Nevertheless, young SA machine shearers with ambition and ability, and a willingness to learn, can have a future abroad. “If you have a good work ethic and are determined to succeed you will have no problem getting a job,” he says.

This is an abbreviated version of an article that appeared in Farmer’s Weekly 17 January.