A horse owner should always call in a vet if his or her horse is suffering a relatively serious injury. Remarkably, however, minor injuries and ailments can be treated with two simple ingredients: sugar and honey. Honey is much more expensive than
sugar, of course, but is often available in rural areas where it may be produced by wild bees or beekeepers.

In the old days, three tablespoons of sugar or honey (sometimes combined with a tot of brandy) in a cup of water was given to a working horse or donkey that was in shock after a fall or injury. Sugar and honey are more useful, however, for treating wounds.

Cleaning
Sugar can be used to clean wounds, as it sucks serum from the bloodstream and loosens dirt, leaves and manure contaminating a wound. This works only for recent, wet wounds, not those that have occurred 24 to 48 hours earlier and are already dried out. It may work, though, if you dampen the wound with water before sprinkling it with sugar.

Bleeding
Sugar can also be used to stop the bleeding in superficial or even deep wounds, in combination with firm pressure on
the wound. This is very useful for deep wounds at the back of the pastern caused by wire cuts. These often sever blood vessels leading to severe bleeding that may be life-threatening. Sprinkle sugar liberally on a piece of clean, folded rag (preferably towelling) or sterile cotton swabs (not cotton wool) and bandage gently but firmly to stop the bleeding.

Over this, fit a support bandage. It should provide enough pressure to support the joints and tendons and prevent too much bleeding, but not be so tight that it prevents circulation in the deep vessels. If the horse holds its leg in the air after bandaging, it’s probably too tight. Remove and replace the bandage with a clean dressing after about two hours, then leave on for about 12 hours and change daily.

Granulation
Honey and sugar increase granulation (tissue growth and healing) in large open wounds that are difficult to stitch. They also kill most bacteria that grow in wounds, but on their own don’t kill moulds and fungi. Use ‘sugardine’, a mixture of iodine and sugar, for these (see below).

Finally, as mentioned in the previous article in the 25 September 2015 issue, all working horses should be properly vaccinated against tetanus. The vaccine must be repeated if they have a severe wound, as the use of sugar or honey to heal wounds is not sufficient to prevent tetanus. It is also essential at all times to use proper hygiene, always washing your hands before and after treating a sick animal.

To make sugardine, you will need 10% povidone-iodine (obtainable from your pharmacist) or Betadine solution (obtainable from your vet). Mix one part of either to two parts sugar. So if you have 100ml of iodine (a small bottle), you can add to it about 200ml of sugar (about two-thirds of a standard coffee mug).

Mix thoroughly until it forms a paste; this can be stored in a sealed glass bottle and will remain effective for a long time.
Sugardine can be used as an ointment on deep or superficial wounds. You may need to add a little warm water to make the wound more sticky beforehand.

It is also a remedy for thrush in the hoof. To apply it, pick up the foot, pack sugardine deep into the grooves on each side of the frog, and bandage it up to keep it in place for 24 hours. 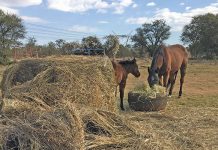